The event, which has been described as the "most important and significant" event for discussing a united Ireland, featured speeches by Tánaiste Leo Varadkar and Sinn Féin President Mary Lou McDonald among several other high-profile speakers. 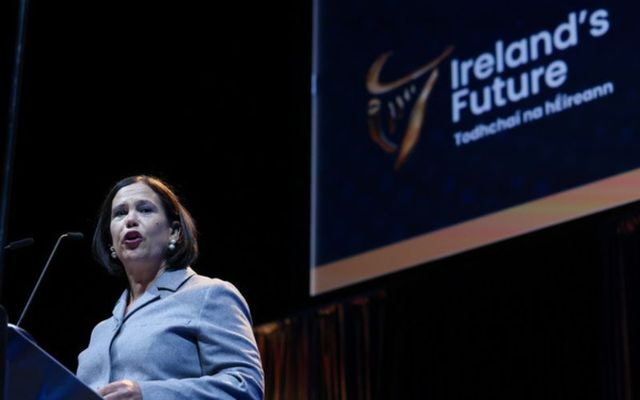 More than five thousand people gathered in Dublin's 3Arena on Saturday to attend a conference held by Ireland's Future, which aims to plan for a united Ireland.

The conference has been described as the "most significant and important" event for discussing a united Ireland.

Ireland's Future, a civic organization advocating for a united Ireland, released a document hours before the event took place claiming that a 32-county republic would cost €4 billion per year, far more affordable than the previous estimates of €10 billion per year.

Officially titled Shaping a New and United Ireland, the document features inclusions from a number of academics that have participated in previous meetings organized by Ireland's Future.

Previous estimates that a united Ireland would cost €10 billion per year were based on the fiscal gap between taxes collected and public spending in Northern Ireland in 2017/18, which totaled £9.2 billion (€10.5 billion).

However, Ireland's Future argues that Northern Ireland's contribution to the UK's defense spending, debt servicing costs, and international services would not be relevant in a united Ireland, reducing the deficit by 25%.

The advocacy group also believes that the UK would continue to pay old-age pensions in Northern Ireland for a period, reducing costs by a further €3.64 billion per year.

This would leave a €4 billion gap between taxes collected and public spending in the six counties, which Ireland's Future argues is "not an earth-shattering amount of money".

The group also claims that Northern Ireland would likely receive support from the EU and the US in the event of a united Ireland.

"Arguably, there will also be a moral responsibility on the part of any departing UK government to provide additional financial supports in ensuring a successful transition to a new constitutional and economic framework," the group said in the document.

"Nevertheless, debates around the likely size of the subvention figure are essentially a deflection as they will almost certainly overstate the cost, if any, of unification to the Irish Exchequer. They ignore both the growth potential of the North’s economy and the productivity improvements that are achievable during any effective transition to unity."

Varadkar told the crowd that a united Ireland would only succeed if it had overwhelming support in the north and south, adding that 50% plus one would not be a "recipe for success".

The Tánaiste said those who dream of a united Ireland must ensure that it does not become a "nightmare" for others.

"A shared, united and new Ireland is something that many Irish people have dreamt about for many years," Varadkar told the event. "It is a noble and legitimate aspiration and one that I share.

"It is an idea that has come a long way in a very short time. When I was growing up in the 1980s, an event like this would have been criticized for being destructive and divisive, if it happened at all.

"In the 1990s, peace changed everything. Old hatreds were replaced by a new hope. We won the freedom to dream anew. We dared to ask what was the next stepping stone in our national story.

"But with that freedom comes a challenge, a responsibility on all of us to ensure that our dreams do not become someone else’s nightmare. A challenge to avoid replicating the mistakes of the past. Imposing our will on the unwilling."

McDonald, meanwhile, told the event that the future of Ireland will be "determined by the choices made today, by decisions of this generation".

"It is our duty as a generation to fix what was broken. To make Ireland the home we know it can be, for everybody," McDonald said.

The Sinn Féin President said Ireland's younger generations will have a key role to play in a united Ireland and praised them for their compassion and talent.

"A generation brimming with compassion, solidarity, and talent. Refusing to be held back by the limitations of the past. Calling-out the inequalities in our society. Demanding a better future.

Leaders of five of the ten major political parties in Ireland addressed the event, with Aontú leader Peadar Tóibín drawing a huge cheer when he declared that the history of a united Ireland will declare the Ireland's Future event as a seminal moment.

Taoiseach Micheál Martin was a notable absentee on Saturday. The Fianna Fáil leader was instead attending his party's Ard Fheis in the nearby RDS in Dublin.

Martin said he has no problem discussing a united Ireland but added that he did not regret being double-booked for Saturday's event.