“Polar low” over Ireland following flooding to cause hazardous conditions 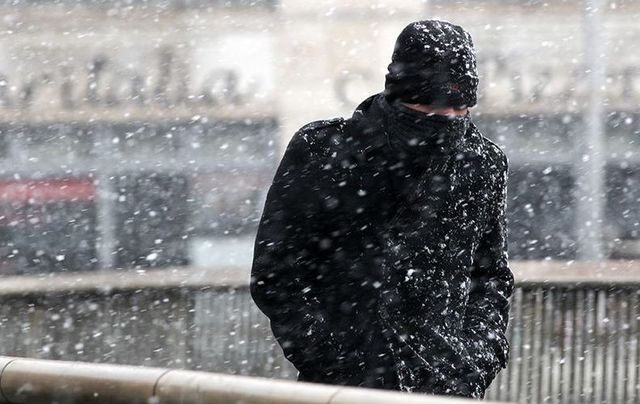 Temperatures this weekend are set to reach 24.8F after heavy raining all week. RollingNews

Temperatures in Ireland are set to plummet this weekend, following a week of heavy rain and flooding in areas. Weather experts are warning of hazardous black ice conditions as this “Polar low” takes hold.

A national status yellow warning is effect across the country until midday on Saturday, November 25, as a “polar low” brings snow and ice to Ireland.

After a week of heavy rain hundreds of people spent Thursday night in emergency accommodation following devastating flooding as three rivers burst their banks in Mountmellick, County Laois. Two housing estates were evacuated by emergency services, while hundreds of other residents in the town had to leave their homes.

It’s estimated that 1,000 people were affected.

The rainfall this week was heaviest in the Dublin region where there was localized flooding and some road closures.

However now the country faces into its second weather warning in a week with temperatures set to become “severe” on Friday night.

In Ulster and Connacht scattered snow showers are expected to be frequent over the weekend.

It's beginning to look a lot like #Christmas. Castlebar wakes up to a light dusting of #snow but sleety rain falling now. Happy #Friday #weather #Ireland pic.twitter.com/pM7JLUBY8L

Gerald Flemming of Met Eireann, Ireland’s meteorological center, said that November has been mild so far, but the cold snap is normal for this time of year.

He told RTE Radio One "It's really a big change from what we've had so far in November which has been a relatively mild month. This time last year we were looking at minus 7 degrees so it's in no way unprecedented.”

The Islamic Cultural Centre of Ireland is opening its doors to the homeless people of Dublin during the predicted ‘Polar Low’ that will bring freezing weather conditions across the country. Click on link for more details.https://t.co/VlBoRd6Zct pic.twitter.com/gcMUkwoHzu

Sadly, for many, Flemming said snow is not expected for Christmas.

"There's no sign of anything like we had back in 2010 when we had that exceptionally cold period. I'd never bank on a White Christmas though. At this stage we just can't tell what it will be like coming into Christmas."

Black ice on the roads

The AA Roadwatch is warning drivers to drive slowly this weekend. “Stopping distances are 10 times longer on snow and ice and gentle maneuvers are the key to safe driving.

"Use major routes as they are more likely to have been gritted than secondary routes."

Read more: Timetable of how an honest cop has led Ireland to the brink of a shock election