Planning permission granted for what will be tallest building in Ireland

A €140 million, 34-story hotel and commercial complex will be built at Custom House Quay in Cork City. 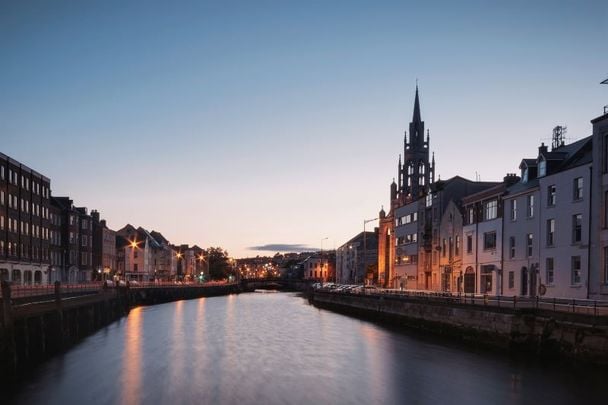 The Cork City Council has granted planning permission for what will be the tallest building in the Republic of Ireland.

Tower Holdings was given the green light to build a €140 ($164) million, 34-story hotel and commercial complex at Custom House Quay in Cork City. The property will house a five-star hotel, shops, a distillery and an interactive visitors center focused maritime heritage and culture, RTÉ reports.

The historic Custom House and the bonded warehouses will be restored as part of the plan.

“We engaged closely with Cork City Council throughout the design process to ensure we satisfied all their requirements, particularly in relation to the conservation and integration approach towards the existing historical buildings,” said a Tower spokesperson.

"We have to now fully examine all the planning conditions and certain points of detail to establish their effect on the scheme."

The design process was led by London-based architectural firm Gensler along with local firm Henry J. Lyons. Arup conducted the engineering work, with Aecom carrying out the public realm design, along with fifteen other consultants and sub-consultants.

According to the Irish Times, Tower Holdings is part of the New York-based construction empire built by Kevin O’Sullivan, who emigrated to the US from Ballinskelligs, Co Kerry in the 1980s.

The hotel will be run by global chain Marriott once completed.

In the initial stages of planning, the Cork tower was to be 40 stories, but even at 34 stories, the tower will be the tallest building in the Republic of Ireland. The new building will surpass Dublin’s 22-story Capital Dock, which was completed last year, and the 17-story Cork County Hall.