Planning for the Pope's 2018 trip to Ireland are already underway

It’ll be the first visit by a pontiff to Ireland since Pope John Paul’s celebrated tour in 1979. 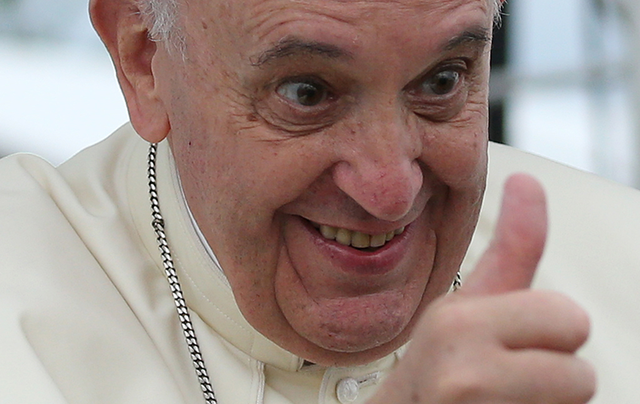 Pope Francis is coming to Ireland!

The Holy See has confirmed that planning for Pope Francis’s visit to Ireland next year is underway. It’ll be the first time a pontiff has visited Ireland since Pope John Paul II’s historic trip in 1979.

The Pope is set to “do everything he can” to make sure the visit goes ahead as planned a Vatican source said.

The visit is set to coincide with the World Meeting of Families due to be held in Dublin in August 2018.

"If the Pope is possibly able to be there, and circumstances around the world permit him to be able to go there, I'm sure he will do everything he possibly can, at least that's what he has expressed, to be there," Cardinal Kevin Farrell said.

But Diarmuid Martin Archbishop of Dublin was more cautious. "If he does come, he'll surprise us and challenge us,” he said.

#Pope expected to attend global meeting of families next year in '#Ireland that has changed dramatically' @ctrlamb https://t.co/DBZNYasG7n pic.twitter.com/Y4JL0Zg534

"It will be very different from an earlier visit, the only time a Pope came to Ireland. Ireland has changed. The Pope has changed and he will live up to challenging us."

Whilst large crowds are predicted for the popular Pope Francis, few would be bold enough to say there will be anything approaching the numbers who turned out for Pope John Paul.

In total over two and a half million people are estimated to have turned out to see John Paul on his three day visit to Ireland. At the time the population of the republic was just over 3.3 million.

In Dublin alone, one and a quarter million people packed into Phoenix Park to hear the pontiff celebrate mass and 10% of Irish boys born the following year were called John Paul.

Next year’s visit is unlikely to herald a renaissance of the name ‘Francis’ among Irish boys but attendance at events should well exceed the 80,000 who turned out in London for a mass celebrated by Pope Benedict in 2010.