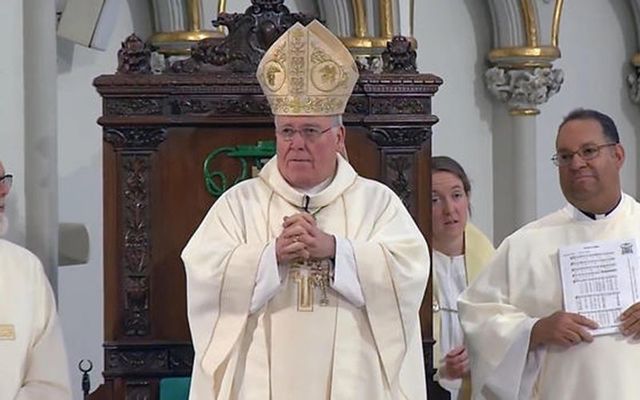 Bishop Richard Malone is accused of covering up scores of old abuse cases and currently covering for up to nine priests in his parish who have allegedly abused young children. His handling of the pedophile issue was the subject of a scathing “60 Minutes” report in November.

Explaining the decision to not march a press release from the Archdiocese stated:

“To prevent the Saint Patrick's Day Parade from being used as a platform to address unrelated issues - however important those issues may be - Bishop Malone, with immense regret, has decided not to march in the Parade this year.... It is not the proper forum for controversy.”

The United Irish American Association, which runs the parade, had stated it was up to the diocese to decide who represented them.

“That is hard for me to swallow because, I don’t mean to sound boastful, but from my deepest moments of prayer and self-reflection, I am a man of integrity…

“I’m a man who can make a mistake and that is what I did in two cases where we had allegations of misconduct by a priest with adults.”

His critics strongly disagree. His main accuser is Siobhan O’Connor, a former executive assistant to him, who came across secret documents revealing up to 118 priests over a long period had been abusers. Malone had spoken publicly of a much smaller number.

She told “60 Minutes”, “Remember, the diocese list had 42 names. The documents revealed put the number of Buffalo priests facing claims of all types of abuse at 118... (they had) credible accusations against them.”

His other main accuser is a fellow cleric, Father Robert Zilliox who told “60 Minutes” that he had repeatedly tried to bring current offenders to the attention of Bishop Malone who had refused to act.

He stated he brought his concerns to Bishop Malone on several occasions and would “walk out of an office and nothing would happen.”

“It is exceedingly rare for a Catholic priest to risk challenging his bishop in public. Father Zilliox left his role as the bishop's counsel in May to concentrate on his parish ministry.”

Father Bob Zilliox stated on the program to reporter Bill Whittaker “A lot of cases should have been handled differently. They were not. A lot of cases probably should have gone to Rome at the time. They did not.”

Bill Whitaker: How many of those priests should have been taken out of priesthood?

Father Bob Zilliox: I would argue at least eight or nine.

Whitaker: How many of them still are in the priesthood here in Buffalo?

Fr Zilliox: All of them.

Whitaker: All of them?

Fr Zilliox: All the guys that should have been removed from the priesthood are still priests.

The Diocese of Buffalo is now under investigation by the FBI and State Attorney General.

Should criminal action be taken against the offending bishop and the priests he helped protect? Should more priests be defrocked in light of abuse cases? Let us know your thoughts in the comment section below.