An Irishman in California ran into a smoke-filled home rescuing pets and saving the house and a vehicle. 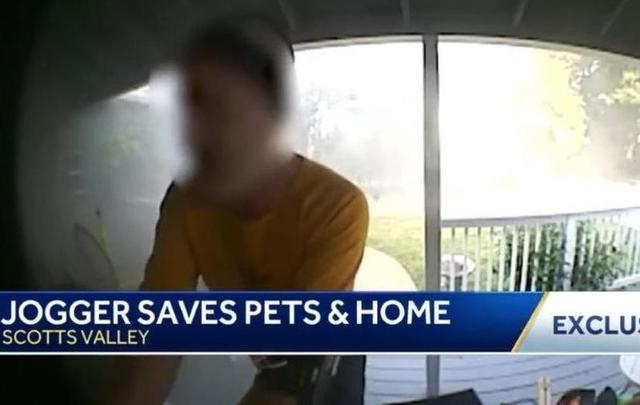 While out on a four-mile run in Scotts Valley, Paul Murphy (50) noticed smoke billowing from a house, rang the house's digital doorbell, and leaped into action.

Paul Murphy (50), originally from Gusserane, in County Wexford, has been called a "humble hero" after his selfless acts saved a family's pets, home, and vehicle from a fire. Murphy ran into the burning building after he noticed smoke billowing from the house while out on a four-mile run in the neighborhood.

Incredibly Murphy rang the digital doorbell of Courtney Polito and said "Hello, do you see there's smoke coming out of the top of your house?". Polito was not at home but remotely opened the door for Murphy who ran inside and rescued the family's two dachshunds, a rabbit a cat, ABC 7 reports.

Polito told the local news channel "I want to give him a hug. I'll bring him to lunch. I'll bring him dinner. I don't know... I just want to thank him so much and let him know how thankful we are. My kids, my husband we would be devastated if we lost our pets, let alone our home."

The fire department told ABC this is the first time they've heard of a Ring camera being used to alert homeowners and 911 of a fire. The emergency services were able to keep the flames contained to the house's garage.

Speaking to the Wexford newspaper, the New Ross Standard, Murphy said “I thought the chimney was on fire. I do the same route every day and was on my way back when I saw smoke coming out of the chimney. I kept on running for a second or two and then I thought maybe I should go over...

“I didn’t see anyone outside the house. As I went over I could see the smoke coming out of the eaves of the garage. I thought something was wrong so I rang the doorbell."

Once Polito had explained to Murphy that she and the family were away he agreed to enter the house and rescue the family's animals.

He told the Standard  “The smoke wasn’t too bad in there. I immediately saw one small dog sleeping. I got that dog out. I saw a bunch of cyclists and handed one the dog and went back in and found a rabbit. There was another dog too. As I was looking for it I opened the garage door and got a huge belt of smoke. By now the fire brigade was there.”

Shortly afterward, Murphy left the scene. However, his story was covered on the local news channel KSBW Action News 8, and Murphy was hailed as a "humble hero".

Murphy, an engineer has lived in America since 1994. Also a family man he told the Standard “If I had gone past it and the house had burnt down and the family lost their dogs, that would have been disastrous."