Paul Mullally, an Irish-born New Zealand citizen, revealed that he was forced to watch his mother die via video link due to New Zealand's Covid-19 restrictions. 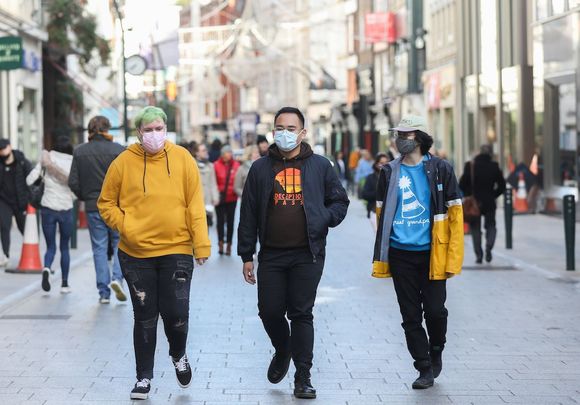 Members of the public wearing face masks on Grafton Street, during the Covid pandemic. RollingNews

An Irish man has demanded an apology from the New Zealand government after he was prevented from flying home to visit his dying mother due to the country's Covid-19 restrictions.

Paul Mullally, an Irish-born New Zealand citizen, revealed that he was forced to watch his mother die via video link due to New Zealand's Covid-19 restrictions.

Mullally has hit out at New Zealand's Managed Isolation and Quarantine (MIQ) allocation system, which stipulated that returning citizens had to secure a place in hotel quarantine before they were allowed to board a flight home between April 10, 2020, and February 28, 2022.

Mullally said he applied for an emergency MIQ slot in January 2022 after his mother Angela "started to go downhill rapidly" in December.

"We heard nothing back. Absolutely nothing, we got an email. We rang everybody, we rang politicians. Every time we rang the helpline, one of the first things they said … the people you're talking to cannot give you an answer," Mullally told the New Zealand Breakfast on Thursday show.

He revealed that he consequently woke at 4 a.m. to watch his mother pass away via video link while trying not to wake his daughter up.

He added that he was given a last-minute MIQ slot one day after his mother's death, offering his family four days in Ireland to say goodbye.

Mullally is now seeking an apology from the New Zealand government for not planning ahead.

"They need to acknowledge that, yes, Covid and all the restrictions were needed at the time. But, this Government, to me, seems to react to things. They don't plan ahead," Mullally said.

Mullally was speaking after the New Zealand High Court ruled that the country's Covid-19 restrictions infringed on the rights of certain citizens looking to return home.

Rachel Bradley, a New Zealand citizen based in France, is also seeking an apology from the government after was refused an emergency MIQ allocation on eight separate occasions to return home to visit her critically ill father.

"One after the other. Because I thought that if I just keep going and keep giving them information, maybe it will get elevated into another process where someone will have some compassion and look at my case and say, yes, this is an emergency," Bradley said.