The Mighty Pat Quinn is rallying people to raise money for ALS research through his #Handlebars4Hope challenge. 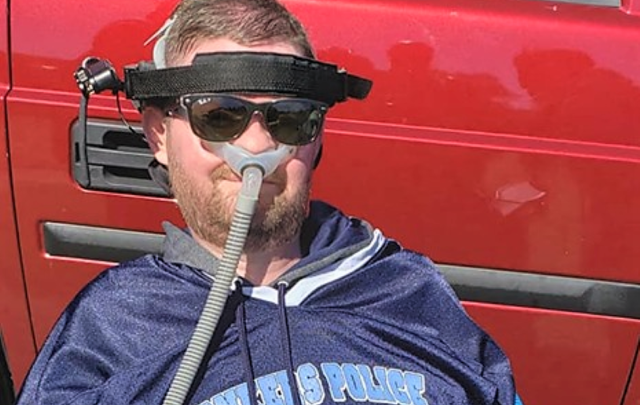 Pat Quinn, pictured here in October 2019, is rallying people to raise money for ALS research through his #Handlebars4Hope challenge. Quinn For The Win, Facebook

Pat Quinn, the co-founder of the viral 'Ice Bucket Challenge,' has begun another challenge in support of ALS research.

Pat Quinn, who has been living with the incurable ALS disease since 2013, is spearheading a new effort to fund research – he’s challenging his supporters and friends to grow handlebar mustaches for the month of June.

The world’s foremost ALS drug discovery center, ALSTDI, reached out to Quinn, co-founder of the ALS Ice Bucket Challenge, and asked if he would shave his head to raise money for their research efforts. Quinn, who lives in Yonkers, posted a message on his Facebook page explaining why he instead offered to get handlebar mustaches trending.

“I didn't say, but I certainly wasn't excited by the idea. I mean, come on, my entire body is withering away from this piece of s*** disease, but I still can grow a nice head of hair! In fact, I am so lucky to have my man and barber, Jerry Lewis, still come to my apartment to give me a fresh cut,” Quinn wrote last week.

“Instead of shaving my head, join me in growing a handlebar mustache as a symbol of hope for all those fighting ALS. Let's create ALS awareness and challenge each other to raise money for ALS research while looking ridiculous with a handlebar mustache. I see firemen pull it off all the time, now it's time for everyone to give it a try!”

Quinn added: “I'm choosing to donate to ALSTDI because they helped spark the idea in my head, as well as being the world's foremost drug discovery lab focused solely on ALS. I believe their work has been severely slowed down by this pandemic and it's time we did something about it! If not, please find your ALS charity of choice and raise money for them!! I don't want to limit this in any way, just make sure it's for ALS!!”

Though women won’t be able to grow a ‘stache of their own, Quinn advises that it’s possible for them to get in on the action too.

“So many wives and girlfriends are gonna want to get rid of these ridiculous handlebar mustaches, get them to raise money to shave it!! It can work on both ends!! Please donate if possible, share, spread the word, and let's do this!!” he said.

Not surprisingly, it didn't take too long for Quinn to hit his fundraising goal of $3,000.  A man of his word, Quinn went live on Facebook on June 10 to share a video of his barber friend Jerry trimming his beard into a handlebar mustache:

“Hope. Everyone needs hope," Quinn says. "Everyone needs to smile, especially right now! I plan on doing both with this new movement.”

You can donate to Pat Quinn's #Handlebars4Hope challenge online here.