A year after ALS took this Irish American advocate's voice an amazing technology has restored it, and the Ice Bucket Challenge inventor is ready to shout from the rooftops! 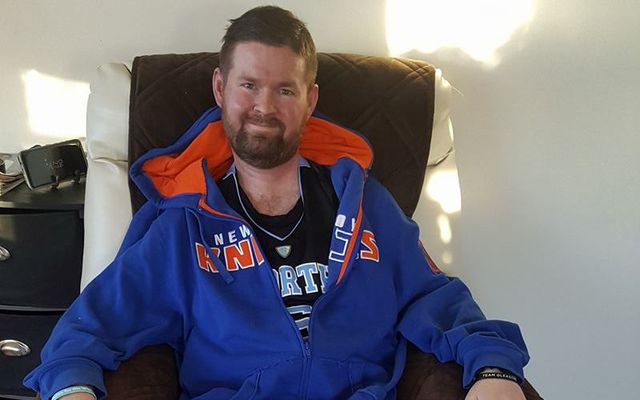 A year after ALS took this Irish American advocate's voice an amazing technology has restored it and the Ice Bucket Challenge inventor is ready to shout from the rooftops!

ALS has wreaked havoc on Pat Quinn’s body since the co-founder of the groundbreaking ALS Ice Bucket Challenge was diagnosed in 2013, but the horrific, incurable disease hasn’t taken his voice thanks to amazing new technology that is allowing Quinn to communicate using his old familiar sound.

Quinn, 35, a first generation Irish American from Yonkers and a beloved giant in the local community, is now speaking loud and clear thanks to his specialized computer which allows him to use his eyes to type words that, thanks to new technology, project into his old voice.

Read more: The mighty Pat Quinn continues his fight to find a cure to ALS

The ALS Association, in conjunction with the Canadian tech company Lyrebird, launched an initiative called Project Revoice which is designed to allow ALS patients to communicate their thoughts using “voice banking.”  Quinn, wheelchair-bound and without the use of his hands, lost his voice to ALS some time ago, but Lyrebird and Project Revoice sourced past audio interviews he gave which allowed them to tailor their technology using his old, recreated voice.

Now, when Quinn eye-types words on his computer, they instantly reproduce in his familiar voice.  The man who launched millions of summer ice dunking videos – raising more than $115 million in the summer of 2014 alone – cried tears of joy when he first started talking again.

“This has changed my life.  As my voice weakened, I slowly became less involved in communication. I didn't want to hear the computer, so I would not get involved in conversations,” Quinn told the Irish Voice.

It's been CRAZY to have my voice again! It's opened me back up like I never thought was possible. This is something everyone should know about. It will change the way ALS patients live moving forward. Check it out at https://t.co/G3uCK7bq7V. #Quinn4theWin #GuessWhosBackBitches pic.twitter.com/Mis71g2pUp

“I would just type what I wanted to say and have the person come stand behind me to read it. Now, I am actively communicating again! I am comfortable because I know the voice I will hear is mine. It's been a mini-miracle in my life.”

Quinn remains as steadfast as ever in his activism on behalf of ALS patients who are desperately seeking a cure for the disease. He’s an expert in using his computer to eye-type, and now that those words are converting into his voice, he says there will be no stopping him.

“I am so excited to get back out there and talk to people. I have my voice back. I am going to do everything I can to get this Project Revoice out there so future ALS patients won't have to lose their voice when the disease tries to take it away,” Quinn said.

The video of Quinn speaking again for the first time is widely available on the internet.  Making the development even more poignant is that some of the funding required for Project Revoice came directly from money raised through the Ice Bucket Challenge.

“I have a piece of me back. ALS lost this round!” said a buoyant Quinn.