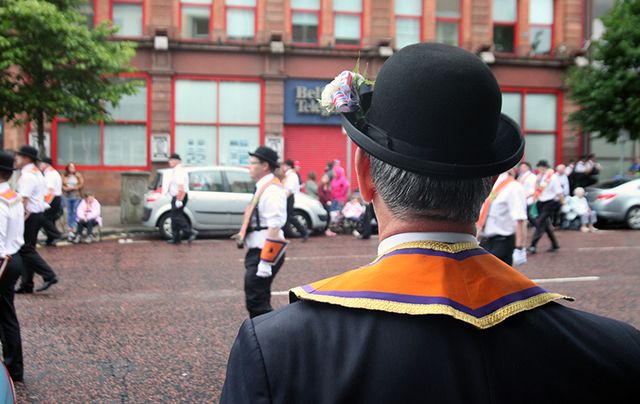 The Orange Order has refused to apologize after photographs of party-goers wearing “disgusting” costumes including a man posing as Hitler, children wearing Jewish Holocaust yellow stars, the Pope with a rope around his neck , men simulating child abuse, and a woman wearing black face.

The pictures are of guests attending costume parties organized by the Whinhall True Blues Flute Band at the Airdrie and District Orange Hall and Social Club in North Lanarkshire, Scotland, in 2010 and 2013. The images were all posted to Facebook. The page has since been deleted.

The Orange Order is a Protestant fraternal organization based primarily in Northern Ireland, with a significant presence in the Scottish Lowlands, throughout the Commonwealth, as well as in the United States and Togo.

In one photo in question, a man is saluting the camera dressed up as Adolf Hitler. He is accompanied by a woman dressed as Eva Braun. They were joined in the photo by two children, dressed in rags and branded with yellow star-shaped patches, like those the Jewish people were forced to wear by the Nazis. A comment under the photo posted to Facebook reads, “Congratulations to our joint winners!!!”

Another entrant from a previous year’s party, organized by the same flute band, was dressed as the Pope. In the photo, he wore a noose around his neck, his tongue lolling, as if he was hanging.

Man dressed as a Pope being hanged.

Another competitor, a young woman, painted her face black, wore an afro wig, a straw shirt and bones around her neck.

Two other men clutched a children’s soft toy, dressed in the Celtic football strip. This was believed to be in reference to the abuse of children within the Catholic Church.

Two grown men clutching a soft toy dressed in a Celtic soccer strip between their crotches.

These photographs were posted to the public Facebook page intended to promote the activities of the Orange Order. The images have been condemned as “hateful,” “racist,” and “breathtaking in their ignorance” by the Scottish Council of Jewish Communities, the Catholic Church, anti-sectarian charity Nil By Mouth and Legion Scotland, which represents veterans.

The Sunday Herald reported that this Facebook page was removed from the social media platform but not before the photos were passed on to the police for further investigation.

Following a lengthy article in the Sunday Herald the Grand Orange Lodge of Scotland released a statement stating that the article was advancing a “baseless agenda to attack and demonize our Protestant Culture & Heritage.”

In the statement, released to their Facebook page, they said, “The Grand Orange Lodge of Scotland is disappointed to note that the Sunday Herald have chose not to cover any of the attacks carried out recently on Orange premises. [sic]

“Unfortunately, this is not the first time the Herald has failed to treat The Grand Orange Lodge of Scotland and its members in an equivalent manner to how it has treated others. The Herald prefer to produce skewed and at times completely false coverage of the Orange Order.”

The images in question were taken at annual Halloween parties. The Facebook page indicated that there were “prizes on the night for best dress.” The administrator of the page congratulated the entrants, posting: “I can see in the albums everyone puts in the effort.”

Local community groups shared their reactions with the Herald. Ephraim Borowski, director of Scottish Council of Jewish Communities, said, “The meticulously planned industrialized murder of six million people solely on the grounds of their ethnicity is not a joke, and neither is anything that glorifies those who planned it.

“Racism, including racism against Jewish people – anti-Semitism – must always be condemned in the strongest terms, and we would urge the Orange Order to do so.”

Referring to the images taken at the flute band’s party – of the Pope hanging and two men holding opposite ends of a toy to their crotches – a spokesman for the Catholic Church in Scotland told the Herald, “The violent imagery depicted in these photographs reflects an extremely disturbing and hateful attitude towards Catholics and other faith minorities. Last month, Scottish Government figures showed religiously aggravated crime at a four-year high. Worryingly, 57 percent of all religious hate crime targeted Catholics or Catholicism.

“Given recent reports, Catholics may quite rightly wish to seek reassurances from their public representatives and Police Scotland that their rights and freedoms to live without fear or prejudice will be protected.”

“Our father who art in Whinhall,

The Haw be thy favorite band,

When they hear the drum,

As we march down Mavisbank,

Forgive us our intoxication,

As we forgive those intoxicated beside us,

Lead us proudly into the temptation of playing our dubious tunes all the louder.”

Director of anti-sectarian charity Nil By Mouth, Dave Scott, said, “These images are breathtaking in their ignorance. Anyone who thinks it is humorous to dress up like Hitler and have kids appear alongside dressed as Jewish children headed for a concentration camp lives on another planet. One wonders how former British service personnel who fought fascism and liberated men, women and children from the gas chambers in the Second World War would view this type of behavior.

He added, “I realize that halls can be booked out for private functions and this may, or may not, have been the case here, but having these images linked to a lodge cannot do the organization’s reputation any good.”

A spokeswoman for Police Scotland said, “The information has been passed to relevant officers to establish the facts and identify any criminality. Police Scotland takes all reports of hate incidents seriously and will investigate such reports appropriately and proportionately.”

Have your say. Should legal action be taken against the Orange Order lodge for promoting this behavior?