Oliver Doran has been charged with murder in Dublin today in relation to the discovery of 76-year-old Kwok Ping Cheng's body in his home off of Cork Street on April 29. 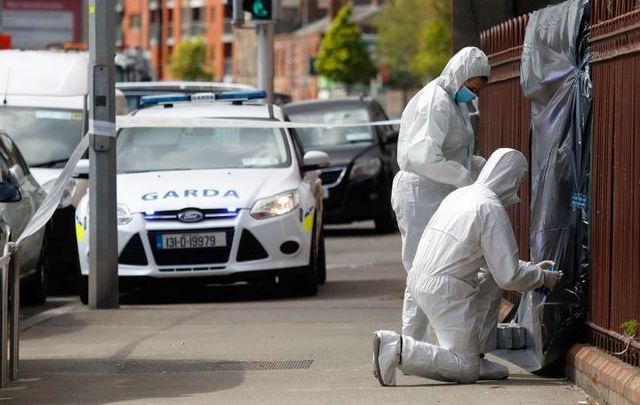 April 29, 2021: Garda Forensics at the scene on Cork Street in Dublin where the body of Hong Kong native Kwok Ping Cheng was found in unexplained circumstances. RollingNews.ie

A 22-year-old man has today been charged for the ax murder of Kwok Ping Cheng, 76, on Cork Street in Dublin on April 29.

The suspect, named in court as Oliver Doran, is accused of bludgeoning Cheng, a native of Hong Kong who has been living in Ireland for a number of years, in his home off of Cork Street in Dublin’s City Centre.

Responding to his charges on Tuesday, Doran said in court: “I'm sorry for the man."

Cheng's blood-soaked body was reportedly discovered by a care worker who visited his home on Cork Street on April 29. Gardai confirmed later that day that they had launched a criminal investigation into the matter and that the victim's body was being removed for an autopsy. The results of the autopsy have not been released "due to operational reasons."

Yesterday, May 5, gardai confirmed that they had arrested a suspect, a male in his 20s, on suspicion of murder.

Today, May 6, Doran appeared in Dublin District Court and was charged with Cheng's murder.

Doran, who is reportedly a father-of-three, unemployed, and was only recently released from jail, has been remanded into custody after being charged. The court did not hear a bail application today as it requires a High Court hearing.

Doran will appear via video link at Clover Hill District Court next Tuesday, May 11.

“He was my best friend. People called us the odd couple because he was Chinese and I’m Irish.

“He used to call in here for a drink with me and would always ask me whether I wanted anything from the shops.

“He was here on Wednesday, the day before the murder, and he was in great form.

“Poor George, he never did anyone any harm.

“He used to leave the front door open and I’d just walk in and call ‘George’ and if he was there I’d go in to him.”