A bust of Oliver Cromwell has been moved after one British MP kept turning it around to face a wall. 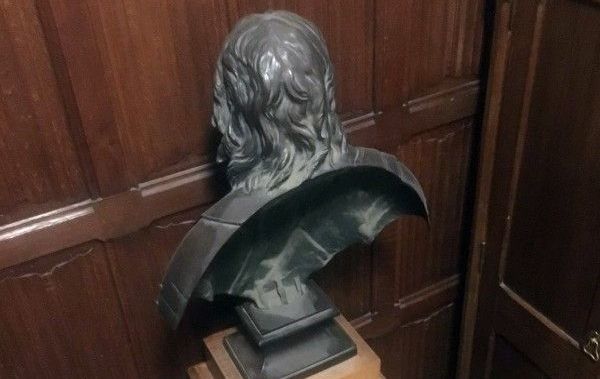 A bust of Oliver Cromwell in the UK House of Commons has been moved and fitted with an alarm after one MP continued to turn the statue to face the wall.

The Daily Mail reports that Labour MP and Shadow Minister for Northern Ireland Stephen Pound had been tampering with the bust for years.

Whodunnit? Someone appears to have turned the bust of Oliver Cromwell in the Members’ Tea Room corridor to face the wall. Was once told it’s the only bust or statue of him in the building #BehindTheScenes pic.twitter.com/ncgwNVxueW

Citing “health and safety reasons,” authorities at the House of Parliament moved the Cromwell bust from it’s “prime” location outside of the Members’ Tea Room in the House of Commons to a different location at 1 Parliament Street, which is ironically nearby to MP Pound’s office.

Read More: Cromwell set sail for Ireland on this day in 1649 - Map shows land he stole

“The butcher turned up on my doorstep,” MP Pound told The Daily Mail.

The British MP added that he was pushing for the statue of the controversial historical figure to be removed from Parliament altogether.

The bust of Oliver Cromwell

Oliver Cromwell is most remembered by the Irish for stealing land for the British and slaughtering thousands of Catholics in Ireland in the 1600s.

“I am in negotiations with the authorities. His butcher stare gets me every morning when I come in,” said MP Pound, who added, “They have put a tremble alarm on it.”

MP Pound believes the matter is even more complicated as Labour leader Jeremy Corbyn does not share his same sentiments regarding Cromwell.

A spokesman for the Houses of Parliament told the MailOnline: “In common with museums and galleries, individuals on the Parliamentary Estate are asked not to touch any statues, paintings or other works of art on display, due to the risk of damage to the artworks."

“Anyone found to be doing so will be reminded of the rules.”

What do you make of the Oliver Cromwell bust saga? Let us know in the comments!