NY Times turned to Ireland to aid journalist, as Trump would not help

The New York Times publisher claims the newspaper reached out to the Irish government to aid their reporter they were told would be arrested in Egypt, fearing the US President's administration would not help. 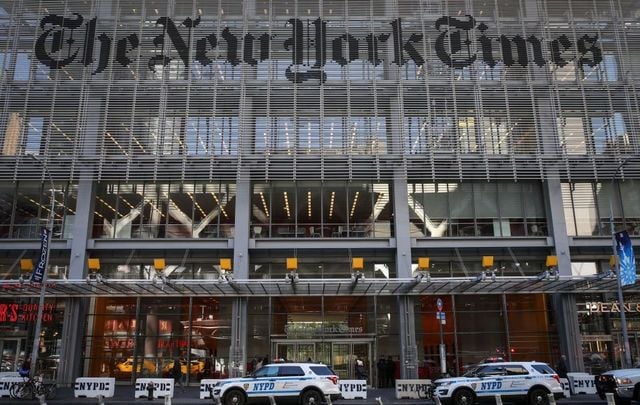 The New York Times publisher claims the newspaper reached out to the Irish government to aid their reporter who they were told would be arrested in Egypt, fearing the US President's administration would not help.

In an opinion piece, published on Monday, New York Times publisher, A.G. Sulzberger, has claimed that, in 2017, they turned to the Irish government to assist one of their reporters, Irishman Declan Walsh. The newspaper had been warned by a US government official the reporter would be arrested in Egypt.

In his opinion piece, Sulzberger was commenting on the growing threat to journalists around the world. He wrote that the US official had passed on information about Walsh's potential arrest to the newspaper in the fear that the US government would not act on the information.

He wrote "Unable to count on our own government to prevent the arrest or help free Declan if he were imprisoned, we turned to his native country, Ireland, for help."

Upon hearing of the potential arrest Irish diplomats traveled to Walsh's house, within an hour, and escorted him to the airport before he could be detained.

Sulzberger wrote, "We hate to imagine what would have happened had that brave official not risked their career to alert us to the threat."

Speaking on RTÉ's Today with Sean O'Rourke Walsh explained that the time, in 2017, he had just published a story for the New York Times magazine about the death of an Italian student, Giulio Regeni, whose body was found on the side of a road in Cairo with torture marks on his body, in February 2016.

Walsh said the death was "an incredibly sensitive subject" between Italy and Egypt.

The Irish journalist has spent months working on the article. The day after it was published he had received a call from the Time's International Editor, saying that the paper had received a warning from a US official fearing his imminent arrest.

The publisher of the New York Times, A.G. Sulzberger, published an important article today about press freedom. He mentioned an incident in which I had to leave Egypt in a rush, fearing arrest, two years ago. Some context on that: https://t.co/pswK66VJJH

The publisher also decried the use of the term "fake news" among world leaders, including Ireland's leader, An Taoiseach Leo Varadkar.

“He has effectively given foreign leaders permission to do the same with their countries’ journalists and even given them the vocabulary with which to do it. They’ve eagerly embraced the approach,” Sulzberger wrote.

He continued "My colleagues and I recently researched the spread of the phrase 'fake news,' and what we found is deeply alarming: In the past few years, more than 50 prime ministers, presidents and other government leaders across five continents have used the term "fake news" to justify varying levels of anti-press activity.

"The phrase has been used to jail journalists in Cameroon, to suppress stories about corruption in Malawi, to justify a social media blackout in Chad, to prevent overseas news organizations from operating in Burundi. It has been used by the leaders of our longtime allies, like Mexico and Israel. It has been used by longtime rivals, like Iran, Russia, and China.