Paul Mulryan brings a High Court action seeking information on his sister who is recorded as having died in the Tuam Mother and Baby Home in 1955. 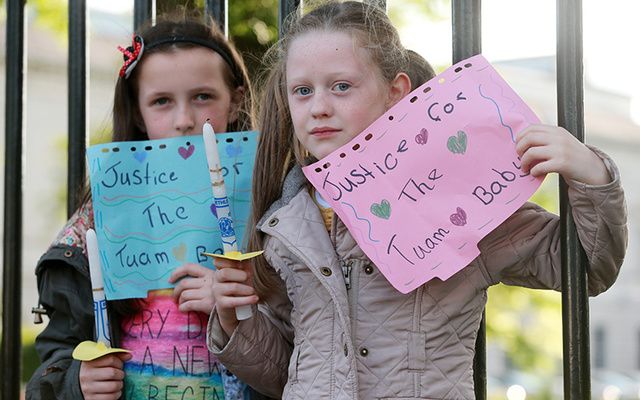 Amy Rose Hyland Holden (left, 10) and her cousin Abbie Conran (9) pictured on the railings at the back of Leinster House in 2014, where a vigil was held to demand justice for the mothers and children who endured cruelty at the hands of the State. RollingNews.ie

The leader of the Bon Secours order of nuns in Ireland has been accused of “lying through her teeth” about the presence of almost 800 babies’ and infants’ bodies found on the grounds of a mother and baby home in Tuam, Co. Galway. The claim was made in the Irish High Court this week by the lawyer representing a man attempting to discover the fate of his younger sister, who, according to the records, died in the home in February 1955 aged nine months.

Peter Mulryan, 73, believes his sister Marian Bridget Mulryan is among the 796 children who are recorded as having died between 1925 and 1961 in the former institution for unmarried mothers run by the Sisters of the Bon Secours. He was too ill to attend court as his solicitor Kevin Higgins urged the judge to help Mulryan "see what happened to that little girl, did she die, was she trafficked or is she buried in the pit."

Higgins compared a letter from Sr Marie Ryan received by Mulryan in 2013 with one he received from Sr Ryan on Feb 15, 2017. He said, "as is the norm for the Bon Secours sisters" Sr Ryan was lying about her knowledge of the bodies being there.

Mulryan now hopes to be granted a judicial review of Tulsa – Ireland’s Child and Family Agency, the dedicated State agency responsible for improving the well-being and outcomes for children – in a bid to discover what information they have on his sister. Tulsa claims that Mulryan already has all the information they have, information the agency has also made available to the State commission of inquiry investigating the claims in Tuam.

Peter Mulryan and his sister Marian were born in Tuam Mother & Baby Home.

Last week, the government commission confirmed the presence of children's bodies – ranging from 35 weeks to three years – in a septic tank on what were the grounds of the home run by the Bon Secours order in Tuam.

The Irish government is now hinting at an extension of the inquiry in the light of public concern after last week’s significant discovery, extending the scope to include a far greater number of institutions than initially planned.

Very fitting that #rtept comes tonight from Catherine Corless' kitchen. She has tirelessly championed every one of the 796 #tuambabies.

Describing the discovery as “appalling,” Taoiseach (Irish Prime Minister) Enda Kenny said, “This is not something that happened way back in the dawn of history.

“This happened in some cases in our own time. It’s a horrendous situation for those whose siblings were treated in this fashion.”

It is believed the inquiry may be extended to include any institution or group that dealt with unmarried mothers and babies, which according to figures from The Justice for Magdalenes research organization could involve as many as 180 institutions, agencies and individuals.

There are currently 14 mother and baby homes and four county homes that fall under the existing terms of reference for the inquiry, which was initially established two years ago to examine State-sanctioned, religious-run institutions used to house pregnant mothers. Three institutions, other than Tuam, have already been found to have have little angels plots believed to hold the remains of another 3,200 babies and infants: Sean Ross Abbey, Tipperary, where the story of Philomena Lee began, Bessborough, Co Cork, and Castlepollard, Co Westmeath.

While a decision on the expansion of the inquiry is not expected in the short term, Irish Minister for Children Katherine Zappone has briefed colleagues on how the issue has developed amid warnings from the United Nations that the current inquiry may be “too narrow” and does “not cover all homes and analogous institutions [and] therefore may not address the whole spectrum of abuses perpetrated against women and girls.”

These UN calls echo those of The Coalition of Mother And Baby Home Survivors who wish for all living people who passed through that home or any of the other facilities to be included in a statutory investigation.

Survivors of these institutions are calling for a meeting with Taoiseach Kenny over demands to expand the inquiry, believing there cannot be a “hierarchy of survivors”.

“It is deeply unfair and hurtful to our community that so many of our fellow survivors have been omitted from the inquiry,” said a spokesperson from the Coalition.

“The real issue here is Ireland’s treatment of single mothers and their babies, not what happened to some of them behind the high walls of the mother and baby homes.

“There cannot be a hierarchy of survivors, we are all equal and we need immediate full inclusion for all survivors.”

The Coalition Of Mother And Baby Home Survivors claim its research estimates at least 6,000 babies, children and mothers died in the state’s homes during the 20th century and it is thought about 35,000 unmarried mothers spent time in one of 10 homes run by religious orders in Ireland. During the 1930s and 1940s infant mortality rates ranged from 30-50 percent in some of the homes.