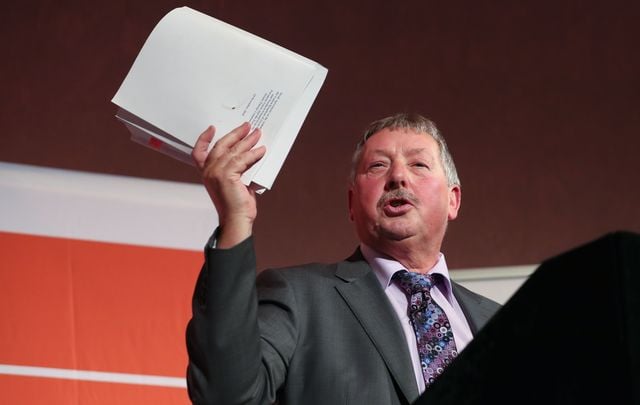 MP Sammy Wilson has said that the Irish border is a “con-trick” being used by the EU and the Irish government during Brexit.

Read More: UK politicians can’t continue to scold the Irish for their own Brexit mistake

Wilson, who is a member of the DUP and is MP for East Antrim in Northern Ireland, was speaking at a pro-Brexit Leave Means Leave rally in Westminster on December 14.

.@eastantrimmp: "The Irish government and the EU Commission sat down and contrived the biggest con trick they could think of: a border in Ireland. They have created a problem that does not exist. So they haven't just kissed the Blarney Stone, they've made love to it." pic.twitter.com/vSeJf1iT99

Read More: How a "no-deal" Brexit is going to lead to Irish unification

At the rally, MP Wilson was introduced by saying he would address “the nonsense, the gibberish, the fabrications,”surrounding the issue of the Irish border throughout the Brexit process.

While speaking, MP Wilson said: “Northern Ireland is now being used by the EU in an attempt to keep the UK in the EU.”

“I think the EU negotiators sat down [and said], ‘How can we create a problem which creates a situation where we can say you cannot leave because there are such big problems?’”

"The Irish government and the EU Commission sat down and contrived the biggest con trick they could think of: a border in Ireland."

As it stands, the Northern Irish border is one of the main sticking points in Brexit negotiations. Both sides feel that the language officially separating UK nation Northern Ireland from EU nation Ireland is too vague.

Referring the current proposed deal, which Prime Minister Theresa May postponed a vote on last week, MP Wilson said: “they made love to the Blarney Stone when they came up with this one.”

“Because, of course, the EU and the Irish government have created a problem which does not exist,” said MP Wilson, which was met with applause.

You can view the entire ‘Leave Means Leave’ rally below - MP Sammy Wilson begins at 38:55:

What do you think of MP Sammy Wilson’s remarks? Let us know in the comments