National Museums Northern Ireland (NMNI) returned the iwi kūpuna (ancestral Hawaiian remains) to representatives from the Office of Hawaiian Affairs at a ceremony at Belfast's Ulster Museum earlier in May. 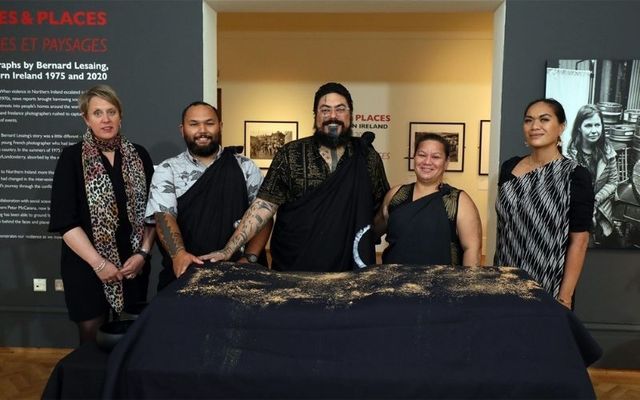 A Belfast museum has returned ancestral Hawaiian human remains almost two centuries after they were taken.

National Museums Northern Ireland (NMNI) returned the iwi kūpuna (ancestral Hawaiian remains) to representatives from the Office of Hawaiian Affairs at a ceremony at Belfast's Ulster Museum earlier in May.

It is believed that ethnologist Gordon Augustus Thomson removed the remains from Hawaii in 1840 before donating them to the Belfast Natural History and Philosophical Society in 1857.

The remains were later included in a 1910 donation to the Belfast Natural History and Philosophical Society, a precursor to National Museums Northern Ireland.

The museum has recently identified certain items among its collections that were stolen from other countries or linked to the slave trades.

The museum has also launched a project to trace how it obtained roughly 4,500 items from Asia, Africa, Oceania, and the Americas in the 19th and 20th centuries.

Carmen “Hulu” Lindsey, the board chair of the Office of Hawaiian Affairs, welcomed the return of the ancestral remains, describing it as an "act of compassion".

"The return of the iwi kūpuna and mea makamae pili aliʻi to this delegation of Native Hawaiians, so that they may be returned home to Hawaiʻi, is an act of compassion and understanding that is much needed and long overdue," Lindsey said in a statement.

NMNI chief executive Kathryn Thomson said the museum has "legal and ethical responsibilities to redress the injustices" against the ancient Hawaiian people.

"We are re-evaluating our World Cultures Collection on an ongoing basis, to better understand the complex global stories of some 4,500 items – and how and why they came to be in Belfast," Thomson said.

"We understand and respect cultural values and are in ongoing liaison with source communities and their representatives to establish if items within the collection can and should be returned to their ancestral homes. We remain open to further repatriations as these engagements develop."