Hans Sloane is the founding father of the British Museum in London. 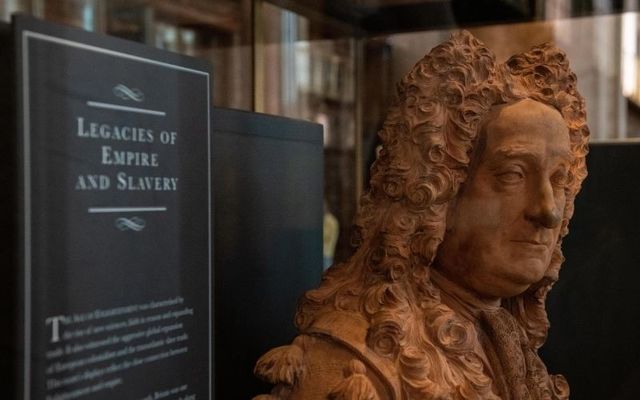 The bust of Sir Hans Sloane in its new cabinet in the British Museum. Getty

The British Museum has moved the bust of an Irish slaveowner to a gallery that addresses Britain's relationship with the slave trade amid further conversations about racism in Britain.

The bust of Sir Hans Sloane, an Irish slaveowner who kept slaves on Jamaican sugar plantations, was moved from a pedestal near the museum's entrance to a new cabinet in the Enlightenment Gallery, which tackles Britain's relationship with the slave trade - both good and bad.

Sloane became the starting point for the British Museum when he donated more than 71,000 artifacts that he had collected throughout his lifetime. The collection was partly funded by slave labor in Jamaica.

Born in Ireland in 1660, Sloane has come under scrutiny in recent months in the wake of the death of George Floyd in Minneapolis.

He was born in Killyleagh Castle and became a surgeon in the Royal Navy's West Indies Fleet before eventually becoming the personal physician of the Governor of Jamaica.

There he married Elizabeth Langley Rose, the daughter of one of Jamaica's largest slaveowners, and inherited large plantations and fortunes.

His links to slavery have prompted the British Museum to move his bust from its pedestal near the entrance so the museum could confront its links to colonialism.

Hartwig Fischer, the institution’s director, confirmed that Sloane's likeness had been moved but said that the museum was not hiding it.

"We have pushed him off the pedestal. We must not hide anything. Healing is knowledge," Fischer told the Daily Telegraph.

The bust will now appear alongside artifacts explaining his role in the British slave trade and Fischer said that being truthful about Britain's history of slavery was absolutely crucial, claiming that more people will now learn about Sloane's role in British slavery now that his bust has been moved.

"The case dedicated to Hans Sloane and his relationship to slavery is a very important step in this. We have pushed him off the pedestal where nobody looked at him, and placed him in the limelight."

Sloane's bust was moved at a time when British historical figures are under unprecedented scrutiny in the wake of the killing of George Floyd and the subsequent Black Lives Matter protests.

British slaveowners Edward Colston and Cecil Rhodes, for example, have been subjected to particularly intense scrutiny. Colston's statue in Bristol was removed during a Black Lives Matter protest while Oxford University has voted to remove Rhodes' statue from the famous college.

Sloane, meanwhile, is honored by many famous placenames in London, including Sloane Square, a fashionable area in the English capital, and Hans Place, where the Anglo-Irish Treaty was signed in 1921.

A statue dedicated to the Irish slaveowner stands in Duke of York Square in Chelsea and protestors are campaigning for its removal, arguing that the statue is an "insult" to the victims of slavery.

Cadogan Estates, which owns the statue, has said that it will not remove it, arguing that getting rid of the statue will not help "our understanding of the past."