No joy this St. Patrick’s Day as COVID-19 restrictions tighten

A strange new reality in Ireland as St. Patrick's Day celebrations canceled due to Coronavirus outbreak. 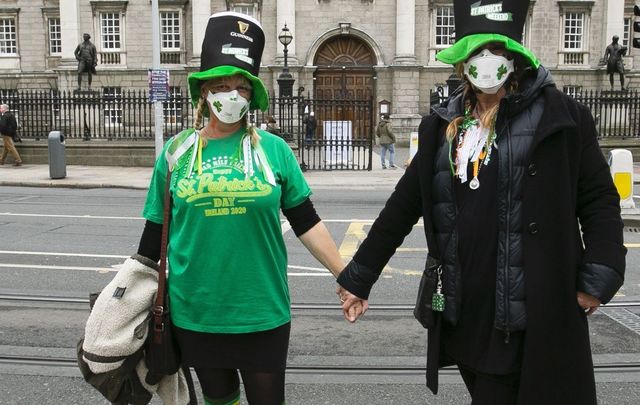 A strange new reality in Ireland as St. Patrick's Day celebrations canceled due to Coronavirus outbreak.

Only the sound of bells from empty churches pealed across Ireland in celebration of its patron saint, Patrick, on his feast-day.

No drinking glasses were clinked in shutdown pubs and hotel bars across the land; no glittering parades passed along empty and city streets; nobody embraced in festive joy.

The awful truth of the coronavirus pandemic was underlined with the prevention of jubilation in the one country most famous for celebrating its patron saint on the same day every year.

The bars were shut until March 29 from midnight last Sunday on government advice following public outrage at packed bars in the tourist hotspot Temple Bar and other areas of Dublin by Friday and Saturday night revelers ignoring an official ban on gatherings of more than 100 at indoor events.

At one stage, Taoiseach Leo Varadkar threatened to seek enforcement powers to sanction establishments that appeared to be operating in breach of social distancing guidelines.

Australian journalist Stephen Quartermain tweeted, “Of all the shocks coronavirus has delivered so far Ireland, closing all its pubs on the eve of St. Patrick’s Day is truly the most unbelievable.”

Another journalist tweeted, “If you want to know how serious the Covid-19 pandemic is, Ireland is closing its pubs. To put that in perspective, only God has ever managed to do that before – and even he has struggled lately.”

Fifty thousand jobs were lost with the pub closures, with many not expected to be reopened when the crisis ends.  Another 90,000 people were laid off work in restaurants and crèche and child-care facilities.

Separately, an additional 200,000 jobs are threatened in shops by the end of this week, according to Retail Excellence Ireland chief executive David Fitzsimons who told RTE, “We’re in a bit of a crisis at the moment. We need government support to lead us through a period of great concern.”

Pub owner Benny McCabe, who shut a chain of 15 pubs in Cork, said he will continue to pay his 300 staff for as long as he can – “for at least the next two weeks and beyond, if the money doesn’t run out.”

He told the Irish Examiner that the shutdown decision will cost him millions but common sense must prevail.

He added, “My staff are worth too much to me to put their health at risk. And I will need my team around me again when we reopen.”

In keeping with the ban of gatherings of more than 100 indoors, there have been no congregations at Masses last Sunday or on weekdays in many churches across the land.

Consequently, although Mass was celebrated without attendance, there was a special pealing of bells in honor of St Patrick in churches across the land on March 17.

Archbishop of Armagh Eamon Martin, the Primate of All Ireland, noting that it was hard for people not to be alarmed, urged special prayers for “the brave and selfless health workers” and medical scientists who are searching for a vaccine and better treatment.”