Fears are mounting that Covid-19 numbers are about to surge once again across Ireland. 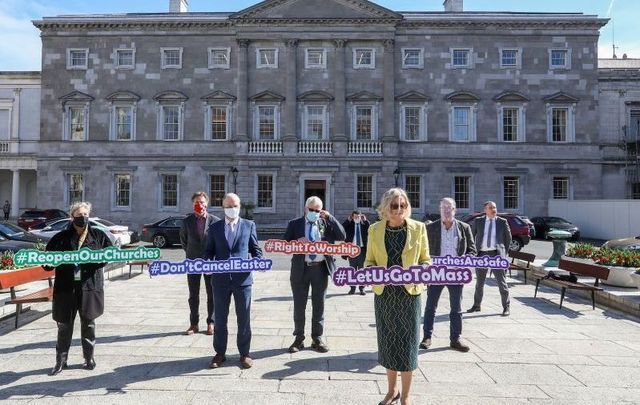 March 23, 2021: A coalition of TDs outside Leinster House call on the Irish government to ensure churches are open for Easter services. RollingNews.ie

Health experts have warned that Ireland's slow immunization rollout is failing to tackle the spread of the killer bug.

*Editor's Note: This column first appeared in the March 24 edition of the Irish Voice newspaper, sister publication to IrishCentral.

The gloomy outlook follows a sharp spike in daily Covid cases last weekend - the 769 cases reported on Sunday were the highest daily increase in three weeks.
And it has triggered an alarming warning from public health watchdogs that case numbers are "stuck,” or worse still, "rising."

The worrying increase in case numbers -- up by nine percent over the past week -- is expected to put increased pressure on the government to extend Ireland's lockdown beyond the scheduled re-opening of the country on April 5.

Professor Martin Cormican, the Health Service Executive’s lead for infection control, described the number of cases as disappointing and urged the public to "be very careful,” adding that "there is a risk wherever people come together."

Speaking to RTÉ, he noted that while the situation in Ireland's hospitals has improved and transmission in the country's recently re-opened schools remains stable, there has been an increased spread in workplaces and other settings.
He said, "It makes no difference to the virus if it's a wake or a birthday party."

His warnings were echoed by Professor Sam McConkey, one of the country's leading specialists in infectious diseases, who said the stubbornly high Covid figures had left the country "stuck in the mud."

Fears that Ireland may not open up early next month will come as a hammer blow to the country's beleaguered hospitality sector.

Earlier this week the lobby group which represents the country's restaurants warned that half of Ireland’s businesses face closure in the wake of the pandemic.
The Irish Hotels Federation has also warned that its members face a similarly challenging outlook, following a fall of revenue by over $2.5 billion last year, a drop of 60 percent. 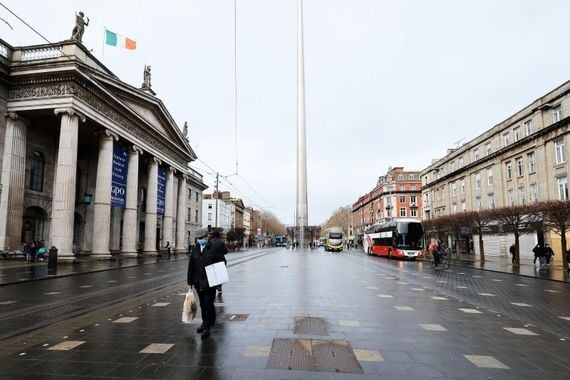 Meanwhile, Ireland's long-awaited quarantine system for travelers arriving from outside the country is set to come into effect this week, but it's emerged it will only apply to visitors arriving from 33 countries judged to be high-risk for the disease.

It's understood that the National Public Health Emergency Team (NPHET) had called for mandatory hotel quarantining to be imposed on all travelers arriving in the country, as have opposition parties in the country.

Despite the heated disputes surrounding the upcoming measures, the Irish Independent notes that Ireland's quarantine system is the strictest of all EU member states.