Irish priest fined for celebrating Mass in front of 40 people, refuses to pay

Irish priest Fr. PJ Hughes insists that he would rather go to prison than pay the €500 fine for celebrating Mass in front of dozens of parishioners. 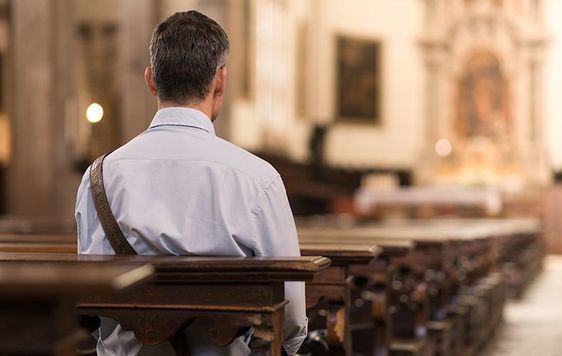 Places of worship have been forced to move services online during Ireland's Level 5 COVID-19 restrictions. Getty

A priest in Ireland who was fined €500 for saying Mass in front of 40 people has insisted that he will not pay the fine and claims that he would rather go to prison.

Fr. PJ Hughes, of Mullahoran parish in Co Cavan, was fined after he breached Ireland's Level 5 restrictions by celebrating Mass in front of dozens of people.

Places of worship have been closed since the end of December except for private prayer, but the Cavan priest said that he does not accept "the negative message" from the Government and public health bodies which he believes is telling people to "stray away from Jesus".

Fr. Hughes told the Irish Daily Mail that he can't take the Government seriously because they never make reference to God.

"We need to face up to the reality that God can help us, but there is no mention of that from the Government. We never hear them saying 'God help us' or 'with God’s help we will be over this,'" he said.

The Cavan priest said that the €500 fine didn't bother him and said that he didn't fear An Garda Síochána.

"I am continuing with Masses… I am not going to pay the fine because I don’t think it is against the law.

"It is our constitutional right to celebrate our faith, I’m not going to pay the fine."

Fr. Hughes additionally said that he did not fear going to jail if he continued to celebrate Mass with people in attendance.

In a letter carried in the Mullahoran parish bulletin on March 21, Fr Hughes wrote that the restrictions are turning people against each other.

He wrote: “Life has become burdened by restrictions; health officials telling us to wear masks and not to go to the church in case we catch the virus. This has turned people against each other.

“If I wish to wear the mask that is fine, but I am not obliged to challenge others who do not wish to wear it. That is their free choice and constitutional right and it should not be taken away from them.

“If Christians were as determined to spread the message that Christ is our Savior as they are to challenge others for not obeying restrictions laid down by this government then we would be on the right track and truly living Lent. May we recognize God’s mercy and be drawn to him rather than be obsessed by regulations and restrictions.”

He continued: “Next Sunday begins the journey of Holy Week. It is hard to believe that for a second year people cannot come to take part in the ceremonies of Holy Week.

“Despite the size of the church and the holy place that it is because of the presence of Jesus in the Holy Tabernacle, the church has been deemed a hot spot for the spread of the virus by the gardai.

“The majority of people are healthy and able to go shopping, bring their children to school and many are working in enclosed environments. We are committing a grave mistake by rejecting our Lord and God Jesus Christ by staying away because government officials say we must.

“I do not accept and will not accept this demand by people who do not realize the wrong they are doing.

“I have been reported again and the gardai have issued a fine because I celebrated Mass with people present. I will exercise my constitutional right even though people are complaining, even though I am not obeying my bishop when I go against his advice. We can’t just reject Jesus in the Holy Eucharist.”