Understanding of Neanderthals all down to this Irish professor

Our knowledge of Neanderthals today is largely thanks to 19th century geologist William King (1809-1886). 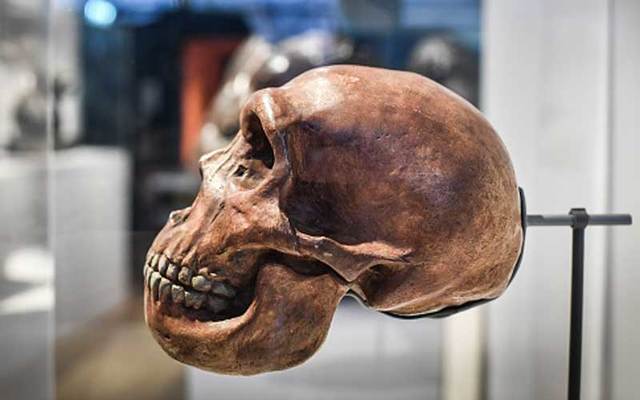 A skull displayed as part of the Neanderthal exhibition at the Musee de l'Homme in Paris in 2018. STEPHANE DE SAKUTIN/AFP/Getty Images)

Our knowledge of Neanderthals today is largely thanks to 19th century geologist William King (1809-1886).

King, a Professor of Geology and Mineralogy at Queen’s College in Galway, was one of the first scientists to recognize Neanderthals as a separate distinct species from modern humans.

In 1856, remains were discovered by miners at the limestone quarry in Feldhofer Cave in Neandertal Valley in the German Rhineland. The workers believe the skull cap and bones belonged to a bear but handed over the fossils to German paleoanthropologist Johann Carl Fuhlrott who in turn showed them to Hermann Schaaffhausen, a Professor of Anatomy at the University of Bonn.

Knowledge of the discovery made its way to Britain by the early 1860s. Scientists of the day believed the strange-looking remains were from a primitive human or perhaps even a deformed or diseased one.

When King obtained a cast of the unusual German skullcap and compared it with a variety of other skulls, he concluded that the skull with its “strong simial tendencies” found in the Neader Valley was different enough from modern humans to form a new species. He gave the species the scientific name Homo neanderthalensis.

He first proposed the name of the new species at a meeting of the British Association in 1863. A year later, he published his work 'The reputed fossil man of the Neanderthal' in the Quarterly Journal of Science.

It was the first time that a new hominin species would be named, a discovery based soley on a comparison of fossils, and for the time period, a shocking discovery at that.

King would later change his mind on placing it in the genus Homo, determining by the shape of the skull that the creature had likely been "incapable of moral and theistic conceptions."

Read More: Dinosaurs were once in Ireland, what would they have looked like?

In his 1864 paper, he proposed in a foonote that “I now feel strongly inclined to believe that it is not only specifically but generically distinct from Man.”

Since then, scientists have recovered bones from more than 500 Neanderthals, dating 40,000 to 200,000 years old. New technologies have enabled genetic studies that have confirmed that Neanderthals and humans descended from the same group of ancestors over 520,000 years ago.