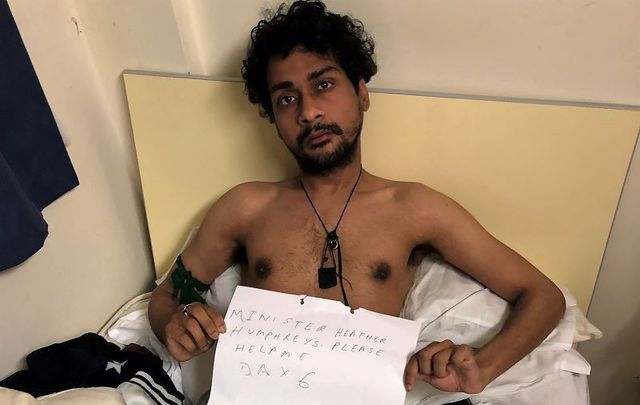 Nadim Hussain, a native of India who has mounted a hunger strike in hopes of being granted permission to stay in Ireland, was hospitalized on Thursday after more than a week without food.

Hussain, an asylum-seeker who arrived in Ireland in 2018, has been living in a Direct Provision center in Co Cork. The 34-year-old was a frontline worker, and taxpayer, throughout the pandemic, working security in a local hospital.

In September, Hussain received a decision from Ireland’s International Protection Appeals Tribunal (IPAT) which affirmed a recommendation that he should be refused a declaration as a refugee and subsidiary protection status.

After receiving IPAT’s decision, Hussain quickly began to appeal to the public and politicians to help him stay in Ireland.

“In India, they killed my father and mother,” Hussain said in a video after his IPAT rejection. “If I return, the militants will kill me also.”

Voices From Direct Provision
"I am working in Ireland 3 years. I am asking the Government of Ireland to please don't send me back to my death for God sake help me" pic.twitter.com/1MZtazxqS9

Hussain received correspondence from the Taoiseach's office on September 22 assuring him that the Taoiseach "is pursuing the issue on your behalf with the Irish Naturalisation and Immigration Service at the Department of Justice," and that he would "soon be in touch with you on the matter."

Hussain has yet to receive any updates.

On October 13, Hussain began his hunger strike to protest his removal from Ireland.

"I will not stop my hunger strike until I have been told that I can remain in Ireland because going back to India will be a death sentence for me," Hussain told Cork Beo on the third day of his hunger strike.

The Abolish Direct Provision Campaign has been chronicling Hussain’s hunger strike and said on Thursday that he was being taken to Cork University Hospital.

“I am feeling that I will die in one or two days," Hussain told The Irish Examiner on Thursday.

I pleaded with the minister James Browne to resolve the hunger strike of Nadim Hussein, an asylum seeker in Cork . A simple phonecall from his department could avert a completely avoidable tragedy. pic.twitter.com/HDmVc5NAWW

Both the Irish Refugee Council and the Movement of Asylum Seekers in Ireland  (MASI) are also urging the Irish government to act.

A spokesperson for the Irish Refugee Council told The Echo on Thursday: “We call on Government to address Mr. Hussain’s situation as soon as possible and before his health further deteriorates. We are very concerned about his welfare and health, more than seven days into a hunger strike.

“We have repeatedly called for people who worked in the healthcare sector during the pandemic to be offered permission to remain as an exceptional recognition of their contribution to Irish society. We wrote to Ministers Humphreys and Browne on Wednesday morning requesting that permission to remain be granted.”

MASI noted: "Ireland does not provide legal aid for an asylum seeker to challenge the appeal tribunal’s decisions in the high court. Thus, people like Mr. Hussain who may well have a winnable case end up being unjustly served with expulsion notices."

The group added: "MASI wishes to express solidarity with Nadim and all other frontline workers who face potential expulsion from the State after putting their lives on the line throughout the pandemic."