Sinn Fein’s request for resignation of Frances Fitzgerald over email scandal if backed by Fianna Fail could lead to a general election. 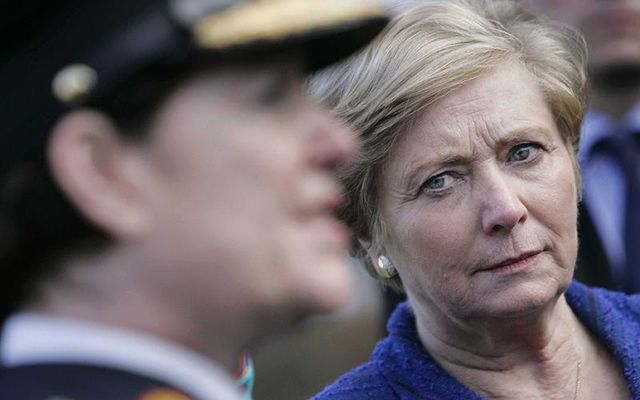 The then Minister for Justice Frances Fitzgerald (right) and then garda commissioner Noirin O'Sullivan. RollingNews

The political party Sinn Féin have set in motions a vote of “no confidence” in Tanaiste (Deputy Prime Minister) Frances Fitzgerald, stating it is “abundantly clear” she should be forced from office.

If Sinn Fein’s request for Fitzgerald’s resignation is backed by Fianna Fail, who are currently in a confidence and supply arrangement with Fine Gael, a general election could be on the cards for Ireland before Christmas.

On Thursday morning former Minister for Justice Fitzgerald launched a defense her time in office saying, “I am not trying to hide anything. I was not part of any conspiracy to malign Maurice McCabe, quite the contrary."

Read more: Bravest man in Ireland battles on against police and government corruption

Fitzgerald said she did not remember reading an email she received in May 2015 outlining plans to malign whistleblower Sergeant Maurice McCabe, at the O’Higgins Commission. She denies being aware of efforts by former garda commissioner Nóirín O’Sullivan to query the “motivation” and character of Sgt McCabe at a commission of inquiry examining claims of police malpractice. They were outlined clearly in the email, which came to light one week ago.

Fitzgerald told the Dáil suggestions that she did nothing about the whistleblowers situation "is completely wrong."

"I was the first Minister for Justice who even met a serving member of An Garda Siochana to discuss an issue like this. I wanted to hear his concerns," Fitzgerald said.

Now Sinn Fein has pushed for a “no confidence vote.” It is likely that Taoiseach (Prime Minister) Leo Varadkar will cancel his trip to visit Irish troops in Mali next week.

She said Fitzgerald was aware of the plans to malign McCabe and “failed to offer when it mattered any protection to Maurice McCabe.

"For reasons you need to explain looked the other way," she said.

"You continued consistently to give political support to one of the architects of that legal strategy. You picked your side and you certainly weren’t on Maurice’s side."

She added that it was time for Fitzgerald to step aside.

Fianna Fáil’s justice spokesman said Fitzgerald was aware of a plan "to attack and try to personally destroy" McCabe.

"You were privy to that strategy. And our criticism is that you did nothing to stop it," he said.

"You were sent this email so that you could either give a green light or a red light to the strategy.

"You could have expressed reservations about the legal strategy. You didn’t do that."

The current Minister for Justice Charlie Flanagan will also face questions over the delay in alerting Fitzgerald and Varadkar about the discovery of the email, which took place on November 9. Fitzgerald was informed of the email’s discovery on November 16, when she phoned the department. Varadkar did not find out until November 20, according to the Irish Independent.