Irish First Mothers believe the manner in which children were put up for adoption by the Mother and Baby Homes to fall under the definition of genocide. 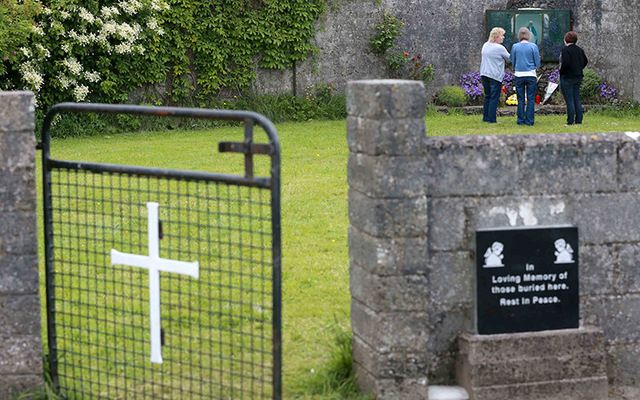 Members of the public pay their respects at the grounds where the unmarked mass grave containing the remains of nearly 800 infants who died at the Bon Secours mother-and-baby home in Tuam, Co. Galway. RollingNews.ie

A group of mothers who were former residents in mother and baby homes in Ireland wrote to the Irish Attorney General Máire Whelan calling for formal charges of genocide to be brought against the Irish state. The charge is made on the basis that the mothers did not give valid consent for the children to be adopted.

Between the late 1940s and early 1970s, 2,200 Irish infants were sent for adoption to America. There have been claims that birth and death certificates of adopted children were falsified in order for the adoption process to take place, claims that are currently under investigation by the Mother and Baby Homes Commission who are investigating the behavior of 18 of said homes as part of an independent inquiry.

Irish First Mothers, which is reported to represent 70 women, claims that the manner in which the babies were presented for adoption falls within the remit of genocide as the forcible transfer of children from unmarried women.

The group has also called on the International Criminal Court to informally assist Whelan if the Attorney General was to proceed with such a prosecution.

The founder of Irish First Mothers Kathy McMahon wrote to Whelan on April 4, 2017, citing the definition of genocide in the UN convention on the prevention and punishment of the crime of genocide as the foothold to the group’s claim.

Describing it as the intentional destruction of “a national, ethnic, racial or religious group”, Irish First Mothers claims the Irish State allowed the Catholic Church to bracket unmarried mothers as such and allowing for their attempted destruction.

“We assert that the perpetrators were malignly motivated by their own Catholic ideological characterization of us as a religiously defined group: a caste of so-called ‘fallen women’,” McMahon said.

“Irish society has a historic, deep Catholic veneration of the ‘virgin mother’ as a deity figure. Thus unmarried mothers were automatically deemed offensively faithless; viewed culturally by perpetrators as bereft of rights.”

“We now charge that a religiously founded and motivated, State-funded, a mass system of de facto incarceration caused us grievous life-long injury; then forcibly removed our children by means of systemically uninformed, impaired consents to the adoption. Our children were with intent transferred from us as unmarried mothers to couples married in civil law under religious ceremonies,” the letter read.

Read more:  Tuam Babies: “It would be... kinder to strangle these children at birth” said doctor

The letter references two incidents, in particular, they believe prove this to be the case.

The first is a 2015 radio interview with former Supreme Court judge Catherine McGuinness who stated: “I must say that, at the time, you wouldn't have thought that the mothers who were consenting to have their children placed for adoption, that they… that they really hadn't a great deal of choice… they were, shall we say- 'encouraged' to place their children for adoption.”

The other was the words of the then Irish Minister for Justice Paddy Cooney at first Irish Adoption Workers Conference in 1974, who said: “I think that we are all agreed that the consensus opinion in our society is to the effect that adoption is better for the illegitimate baby than to be cared for by its mother.”

The Attorney-General has since responded to the group, according to The Times, to say that she does not have any prosecution function to bring such charges against the Irish government as their legal advisor.

The calls of Irish First Mothers for a widening of the scope of the Mother and Baby Homes investigation was somewhat strengthened last month by the criticism of the Irish government by European Human Rights Commissioner Nils Muznieks, who called on the state to widen the terms of reference of the inquiry.

In a report issued on March 29, the Commissioner "stresses the need to ensure that all international human rights standards in this field are fully respected at all stages of the restorative processes.

"The Commissioner recalls that all victims have a right to be treated with dignity, to truth, full support and effective remedies ensuring reparation, including apologies, compensation, and rehabilitation, as well as to investigations into allegations of abuses that are prompt, independent, thorough and capable of ensuring the accountability of the perpetrators," said the report.