Mayor Valérie Plante claims requests to consult with the Irish Montreal community, who want the Griffintown light rail station named for the Great Hunger victims buried close by, were meant to "stir up discord." 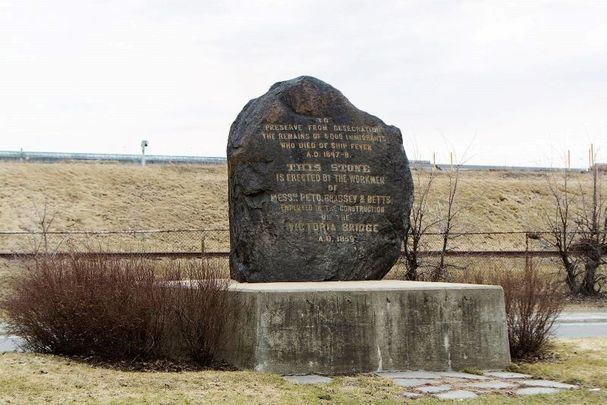 Mayor Valérie Plante claims requests to consult with the Irish Montreal community, who want the Griffintown light rail station named for the Great Hunger victims buried close by, were meant to "stir up discord."

The Mayor of Montreal, Valérie Plante, has said she will stand firm on naming the future Réseau Express Métropolitain (REM) station in Griffintown after late premier of Quebec, Bernard Landry, refusing to engage in discourse with the Irish community, with relation to the Irish Famine mass grave believed to be in the area.

In November the REM discovered skeleton and coffin remains believed to be those of victims of the Irish Famine who had fled to Canada in the 1840s. For some time it's been believed that up to 6,000 Irish Great Hunger victims are buried in the area.

Currently, the only memorial to the Famine dead is the "Black Rock", a boulder erected by construction workers who discovered remains while constructing the Victoria Bridge, in 1859.

Speaking on Monday, at city council Plante stood firm on the plans to name the station “Griffintown—Bernard-Landry” despite the Irish community's petitions for the station to reflect the Irish people's connection to the area since 1847.

Plante said, "No one is left out of that name.” She added that the opposition was trying to "stir up discord" on the matter.

Despite this, the Montreal Gazette report, she did acknowledge the area's importance to the Irish community but also added: "it’s also the entrance to the multimedia district founded by the former premier Mr. Bernard Landry, who made a major contribution to the economic development of Montreal and Quebec."

Plante said “I’m the mayor of social cohesion and discussion, and so much the better if there is a lively discussion between the communities that built Montreal, both francophone and anglophone."

Opposition councilor Mary Deros denied she was trying to create division in the city council or to Landry’s contribution to Quebec.

Deros said, "I simply wanted to emphasize that the Irish community has been part of the history of our beautiful metropolis since 1847 and that it should be consulted in the context of the development of this sector."

She added, "The whole community should be consulted on questions relating to their history and heritage."

The Gazette reports, that Benoît Dorais, the Mayor of the Sud-Ouest borough and Chairman of the Executive Committee, pointed out that while the city is not budging from its request to name the station after Landry, it is the REM that will make the final decision.

Dorais said "The city was suggesting that it was a great idea to both pay tribute to the Irish by including “Griffintown” and at the same time also to Mr. Bernard Landry, who greatly helped to develop the multimedia district."

The Irish community has been banding together in opposition to the city's decision. Local historian and Montreal native Donovan King, who sits on the board of directors for the Montreal Irish Monument Park Foundation, said last month that Landry “had absolutely no connection to the Griff — and he also had a dark history of berating immigrants, as noted by the media worldwide, even the New York Times, after the 1995 referendum.

A Montrealer is asking Mayor Plante to reconsider her plan to name the future REM station in Griffintown after Bernard Landry. pic.twitter.com/o1GpJ1K53l