Irish Canadians local to Griffintown, which has a long rich Irish history, in Montreal, Quebec are battling to see a new light rail system station honor their heritage and impact. 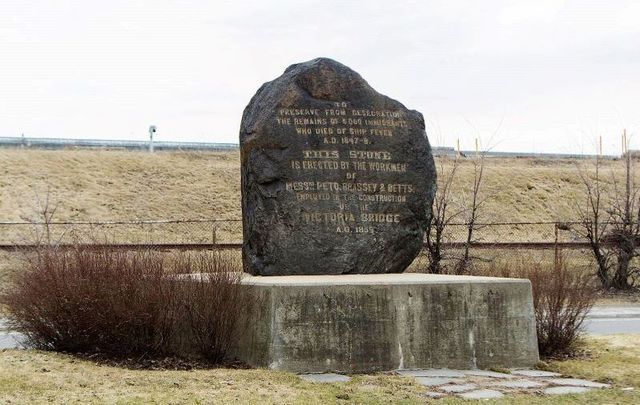 The naming of a new REM (Réseau express métropolitain,  a rapid-transit system being rolled out in Montreal) station in the historically Irish town of Griffintown in Quebec is causing frustrations within the local Irish community.

On November 6, Valérie Plante, the mayor of Montreal, revealed in a string of tweets her plans to name the REM station in Griffintown after former Premier of Quebec Bernard Landry: “Very happy to announce this morning that I wish to take advantage of the arrival of the REM to name the station that will be launched in Griffintown in honor of former Prime Minister Bernard Landry, whose sad anniversary of his death is celebrated today (1/3)

“The Griffintown-Bernard-Landry station would recognize Mr. Landry’s important contribution to the development of our city, in the middle of the Cité du Multimédia, which has become the symbol of the bold economic vision of our former Prime Minister. (2/3)

“I had the pleasure of proposing this idea to the Caisse de dépôt et placement du Québec, which was open to it. The circle of friends of Bernard Landry was also favorable to the idea. (3/3)”

The Irish community, however, is banding together in opposition to have the station named after Landry. The issue lies in the fact that Griffintown has a long history of Irish roots, and that Bernard Landry, who one historian points out to have had no direct impact on Griffintown, is considered to have been anti-immigrant during his time.

Local historian and Montreal native Donovan King, who sits on the board of directors for the Montreal Irish Monument Park Foundation, said last month that Landry “had absolutely no connection to the Griff — and he also had a dark history of berating immigrants, as noted by the media worldwide, even the New York Times, after the 1995 referendum.

Griffintown is currently home to Black Rock, a boulder erected in 1859 to memorialize the Irish people who immigrated to Montreal during the Great Famine but perished upon arrival amid a typhus outbreak. CBC reported earlier this year that historians believe Black Rock is “the first-ever memorial to those affected by the potato famine and the biggest Irish gravesite outside Ireland.”

In November, as excavation work was underway for the new REM station, bone fragments thought to be of those of Irish immigrants dating to the era of the Great Hunger were discovered at the site.

On December 6, King penned an op-ed in hopes of continuing the Irish community’s battle: “Given that Montreal’s Irish immigrants built Griffintown from the ground up, including the Lachine Canal and Victoria Bridge, many feel that it is extremely insulting to name the REM station after a controversial and divisive politician. Bernard Landry made anti-immigrant rants, despite being descended from French colonial immigrants himself.

King later notes: “Montreal’s historical Irish roots date back to the days of New France, when Irish soldiers defeated by Oliver Cromwell were given the option of moving to France to fight for the French king. Many did just that, resulting in approximately 5% of the population of the New France colonies having Irish roots. Today, almost half the population of Quebec, a full 40%, has some Irish ancestry.”

On December 9,  however, Plante doubled down saying: “The fact that we have the name ‘Griffintown – Bernard Landry’ creates a dialogue that we still need today.

"But it doesn’t minimize the huge contribution of the Irish community to the city of Montreal."