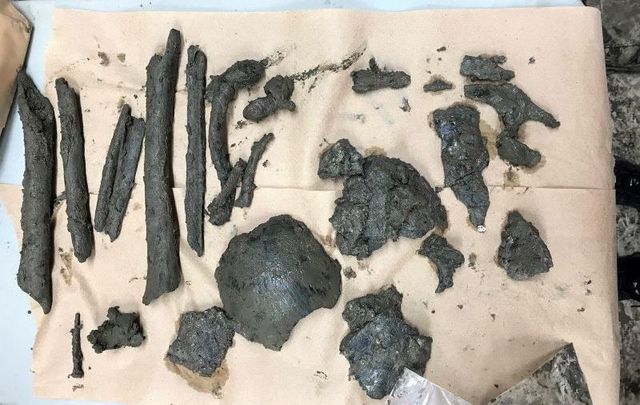 Bone samples from more than a dozen bodies have been discovered at the construction site for a new light-rail system in Montreal. Victor Boyle / Montreal Irish Monument Park Foundation, Facebook

Irish Canadians in Montreal are pleased with the progress and handling of the excavation of Famine-era bone fragments that were recently discovered in an approximately 200-year-old grave plot where construction for a new light-rail system is underway.

CTV News reports that last month, bone fragments were discovered as construction commenced for the REM, 'Réseau express métropolitain,’ the rapid-transit system being rolled out in Montreal. Bone samples from more than a dozen people were discovered in a 2.3 meter-diameter spot that will eventually hold on the light-rail system’s pillars.

Irish Canadians were already tuned into the construction at the site as they are aiming for the new light-rail system’s stop in the area to pay homage to the district’s strong Irish legacy. Nearby, the Black Rock memorial honors the thousands of Irish migrants who, in fleeing the Famine, died soon after arriving in Canada amid a typhus outbreak.

CBC reported earlier this year that historians believe Black Rock is “the first-ever memorial to those affected by the potato famine and the biggest Irish gravesite outside Ireland.”

Boyle said: "It's one thing to say, over and over – which we have for generations – that this is an Irish cemetery, there are 6,000 bodies buried here. That part of the history is well known.

“But to see these remains with my own eyes, to touch a coffin with my own hands? It's something that just goes beyond description.”

Victor Keyes, who also visited the site, said in a Facebook post: "We had a great chance to speak with the archeologists on site. They now believe that they had recovered about 14 remains – some are adults, some are adolescents, and some are children. As mentioned in the past, more details about each of these individuals will be possible after the laboratory tests are completed – which might be many months away.

"However, we were told that the remains were in very good condition, likely based on the fact that they were in a clay type soil - and therefore it is very, very likely that DNA can be extracted from these remains."

Boyle says that the REM have “gone way beyond any of our expectations when it comes to the respect and care and handling of the dig and this site. It’s almost as though they’re digging in the cemetery of their own relatives.”

“It’s more than just a science, it’s a labor of love,” Boyle added.

Boyle said he and his group are hoping to re-inter the remains as close as they can to the original site.

“Imagine - these people have been buried beside each other for over 200 years. To just start separating them would just be unconscionable.”