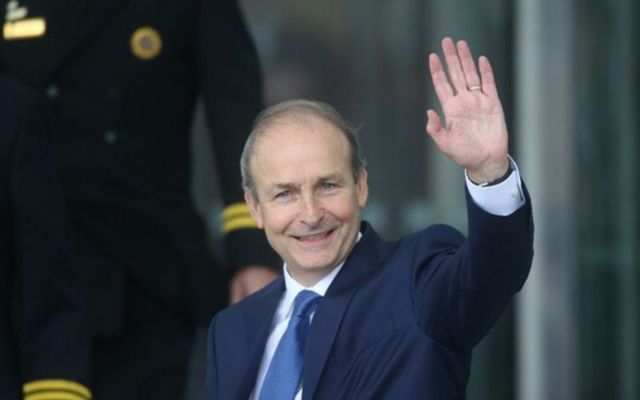 Fianna Fáil's Micheál Martin has been elected Taoiseach of Ireland's 33rd Dáil in a historic vote in Dublin's Convention Center.

A total of 93 TDs voted in favor of Micheál Martin as Taoiseach, while 63 voted against.

In a historic moment, all 35 Fine Gael TDS voted in support of Martin, who will serve as Taoiseach for two and a half years before outgoing Taoiseach Leo Varadkar takes over the role once more.

A bit of history: every @FineGael TD standing up to say ‘Tá’ and support @fiannafailparty leader @MichealMartinTD as Taoiseach @rtenews pic.twitter.com/D6O6jUVc7Y

The new coalition government is made up of 38 Fianna Fáil TDs, 35 Fine Gael TDs, and 12 Green Party TDs.

Later in the day, Martin traveled to Áras an Uachtaráin, where President Michael D. Higgins presented him with the Seal of Office.

Micheál Martin is presented with the seal of office as Taoiseach from President Micheal D Higgins | Live updates: https://t.co/v3AU59ngdv pic.twitter.com/VxaE2CAXTT

Fianna Fáil and Fine Gael have traditionally aligned themselves with the pro-treaty and anti-treaty sides of the Irish Civil War since their foundation.

Micheál Martin, meanwhile, said that "to be elected to serve as Taoiseach of a free republic is one of the greatest honors which anyone can receive."

Speaking about the COVID-19 pandemic, Martin said that the country would overcome the global health crisis.

"Our country has shown time and time again that we can overcome the toughest of challenges – and we will do so again."

Read more: What you need to know about Ireland's next leader Micheál Martin

The historic coalition was ratified by members of all three parties on Friday night after weeks of deliberation had finally resulted in a program for government.

A total of 74% of Fianna Fáil party members voted in favor of the coalition, with 76% of Green Party members and 80% of Fine Gael members backing the program for government.

It has been more than four months since February's general election with talks between the three parties often deadlocked. The outgoing Fine Gael minority government has acted as a caretaker government in the interim.

Not everyone is enamored with the new government, however.

Sinn Féin President Mary Lou McDonald called the coalition a "marriage of convenience" that lacks ambition. McDonald said that the coalition was borne out of necessity to keep others out of government.

"Faced with the prospect of losing their grip on power, Fianna Fáil and Fine Gael have circled the wagons," she said.

McDonald said that the new government was not the change that people voted for in February and said that there would be change in the future.

Sinn Féin will lead the opposition with 37 seats in the new Dáil and many smaller opposition parties also voted against Micheál Martin as Taoiseach, including the Labour Party, People Before Profit, the Social Democrats, and a number of independent TDs.