Irish man Michael Mullan, who was given six months to live back in 2015, married his childhood sweetheart Melissa Murphy this month in New York. 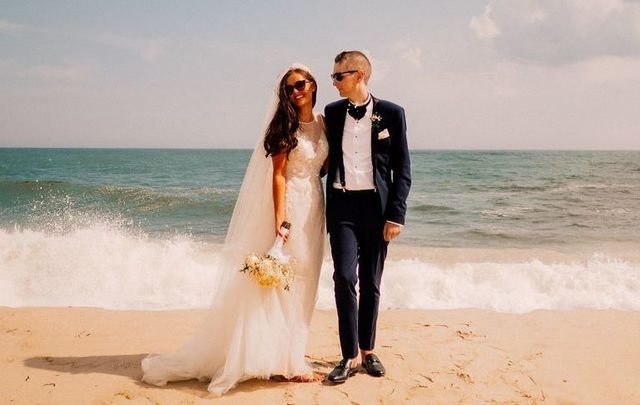 Michael Mullan, who was given six months to live back in 2015, married childhood sweetheart Melissa Murphy this month

Irish man Michael Mullan, who is currently battling cancer for the third time as he pursues his Ph.D., married his childhood sweetheart Melissa Murphy this month in New York.

Speaking with The Independent,  27-year-old Mullan said: "I had cancer as a child, as a year and a half, it was called neuroblastoma and I was told I had a one in four chance of surviving.”

"I suppose growing up I always had a background of cancer, knowing I was lucky to have survived it, hearing from my parents what I had gone through. I was lucky I was a child that I didn't remember it too much."

Mullan received his second cancer diagnosis while he was in his final year of undergraduate studies at Trinity College in Dublin. Despite this, he graduated at the top of his class and secured a scholarship to the prestigious Harvard Law program for his Master's.

However, just a few months after moving to Boston with his Murphy to begin his Master's program in 2015, Mullan was dealt a devastating blow when he learned of his third cancer diagnosis.

This time, doctors said he likely only had six months to live.

"They thought it was a chest infection or pneumonia but given my cancer history, they decided to send me for a CT scan and an x-ray. That came back that the cancer had spread to my lungs, abdomen, and lymph nodes - that it was back again."

"It was a bit of a shock to the system - I had thought I had finished with cancer and that it was a new start in America so it was kinda hard to deal with.”

The Irish man was not deterred: "To hear you have six months to live, I didn't really know what to make of it so we just decided I'd beaten it twice before, why not a third time?"

In the wake of his third diagnosis, Mullan knew it was time to propose to his girlfriend of ten years.

Mullan said: "I organized a boat ride in Washington, we knew a friend who had a boat, so he took us out around the river and we came back to our apartment and went up to the rooftop and proposed there, and luckily she said yes.”

Reflecting, Mullan said: "I never really thought I would get to that stage, given the fact I had only six months to live, I never thought I'd get to marry Mel so it really meant a lot to be able to get to this stage."

On July 12, Mullan and Murphy wed in a friend’s garden in New York. The Michael Mullan Cancer Fund page on Facebook shared heartwarming pictures from the couple’s big day:

Stage 4, incurable, metastasized cancer can’t stop our warrior Mick! In 2015, we never thought we would see this day....

"A lot of people came over from Ireland so it was nice to have our friends and family around us and just to celebrate the occasion.”

"It was actually perfect. Coming up to it, we were a bit nervous because it was giving it thunderstorms on the morning of the wedding but thank God, all the prayers worked out and it was a beautiful, sunny day so we were very lucky."

Read More: Texas cancer girl's wish to meet a leprechaun at The Alamo and go to Ireland granted

Mullan is grateful he was able to be treated in the US at the world-renowned Dana-Farber Institute in Boston, despite the staggering medical costs.

"If I hadn't been in America, there would've been no treatment for me back home in Ireland. It was unlucky in ways, but I was lucky in another way to have world-class care and I was in the right place in the right city at the right time."

Friends and family have rallied around the inspiring Irishman with a GoFundMe in hopes of raising €100,00 (approximately $111,000) for medical expenses.

The Irish man’s condition is stable at the moment. "Luckily the [chemotherapy] I'm on at the minute is keeping it stable so the cancer is not spreading - that required a different mindset to be changed. Back in Ireland, you either have cancer or you don't and it's either good news or bad news but over here, there's an in-between where you have cancer but you can lead a good quality of life.”

"There are some side effects, and I am on about 40 tablets a day but it's worth it, considering the quality of life I have.”