Mica campaigners as well as Irish politicians have taken issue with the sliding scale provision included in the newly revised Mica redress scheme. 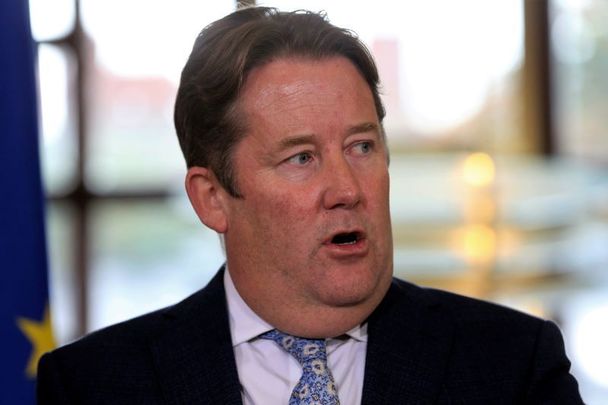 November 30, 2021: Fianna Fáil Minister for Housing Darragh O’Brien at a press conference in Dublin Castle to report on a memo he brought to Cabinet relating to the Mica scheme. RollingNews.ie

The Irish government has signed off on a revised mica redress scheme in which grants will be capped at €420,000 per property.

The figures in the sliding scale are set to be reviewed year on year “to reflect the true and real building costs of the time,” Fianna Fáil TD for Donegal Charlie McConalogue said on Tuesday.

Michael Doherty of the Mica Action Group told RTÉ Radio on Tuesday that he spoke with Ireland’s Minister for Housing Darragh O’Brien shortly before the government’s memo was published.

“There was no word of a sliding scale,” Doherty said, “and if you’re asking me where one of the biggest deficits is in the entire scheme, it’s the sliding scale.

“The devil in the detail that came back to haunt us again when we thought we had a number - it wasn’t perfect at 145 because we know we needed a minimum 150, but it was certainly going the right way.

“But details emerged further on then that the sliding scale kicked in there, and that really took any good that we had out of this today.”

He added: “The sliding scale as it stands right now, means the average homeowner having to find €65,000, and no, we can’t ask a homeowner to do that when there’s no fault to a homeowner in the first place.”

When asked if he endorses the revised scheme, Doherty said: “I am in the belief that there are certain aspects of this which is a step forward, we really welcome that. But the sliding scale is the biggest problem we have right now and I think we need to do something about it.

In a statement issued on Tuesday, Ireland’s Department of Housing, Local Government and Heritage outlined the “key improvements” to the current mica redress scheme:

The grant calculation methodology will be based on the cost per square foot (psf) of rebuilding the existing home, with costings to be set by the Department of Housing, Local Government, and Heritage in consultation with the Society of Chartered Surveyors Ireland. An indicative rate of €145 per square foot for the first 1,000 sq foot based on SCSI methodology with a sliding scale thereafter.

Alternative accommodation and storage costs to be included, subject to a maximum of €20,000

In relation to works carried out under remediation options 2-5, a second grant option, will be available for such a home in the future if blockwork which was not removed as part of the initial remediation work subsequently proves defective in accordance with the IS;465 standard

A new independent appeals process will be introduced

The Scheme will be extended beyond the current scope of Principle Private Residences only, to also cover RTB registered rental properties, subject to the introduction of a clawback mechanism upon re-sale within a set time period depending on the remediation option used. Opportunities for the State to acquire such rental properties for social housing purposes will also be examined.

Ireland’s political parties are now at odds as to whether or not the revised scheme delivers 100% redress.

"I was delighted to secure agreement with my Cabinet colleagues today on a new Mica 100% Redress Scheme,” McConalgue said on Tuesday.

"I was delighted to secure agreement with my Cabinet colleagues today on a new Mica 100% Redress Scheme.

The scheme will deliver the support needed for families to fix their homes and will adjust each year to reflect the updated costs of building." #micaredress@McConalogue pic.twitter.com/AiiPUa5oFy

Sinn Féin, however, said that the “government needs to go back to the table" and that the sliding scale provision needs to be removed.

"Just to be clear, the scheme announced by the government today is NOT a 100% Redress Scheme," Donegal Sinn Féin TD Pádraig Mac Lochlainn said.

Just to be clear, the scheme announced by the government today is NOT a 100% Redress Scheme. A family that have to demolish and rebuild their average sized home will have to contribute €65,000. It’s nowhere near 100% Redress. The Gov need to urgently go back to the drawing board