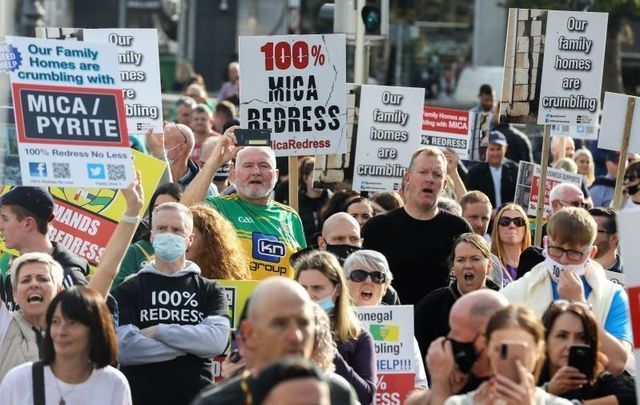 Mica homeowners will take their campaign to the EU next month as they attempt to secure 100% redress for their defective homes.

Thousands of homes in Donegal have been affected by the mineral muscovite mica, which affects the cohesion of cement and damages the structural integrity of homes.

However, campaigners have demanded 100% Redress, No Less and organized a large protest outside Government buildings last month involving up to 25,000 demonstrators.

A delegation of mica homeowners will now make a presentation to the European Committee on Petitions in Brussels on December 1, according to long-time campaigner Eileen Doherty.

Doherty told Donegal Now that the delegation will consist of a combination of people from the Mica Action Group and other campaigners.

Any EU citizen or resident of a member state submit a petition to the European Parliament on an issue that comes within the EU's fields of activity and affects them directly. The petition can be submitted individually or in association with others and may take the form of a complaint or a request related to public or private interests.

She said that the delegation represents 20 affected families and will meet MEPs in Brussels.

"We want to meet as many MEPs and officials in Europe and tell them the story of the mica in Donegal.

"The petitions talk about why Ireland did not adhere to this legislation. They are an opportunity for each of the families to tell their story, to talk about how mica has impacted their lives, as a consequence of this lack of adherence to legislation."

Two presenters will deliver the petitions on December 1, while the families will also have the chance to speak if they wish, Doherty said.

Doherty said that there are EU directives that center around how concrete blocks are brought into the Irish market but said that the Irish Government failed to ensure compliance with the directive.

She said that legislation has also existed in Ireland since 1949 governing the incorporation of mica in concrete products and added that the Irish Government has failed to adhere to its own legislation.

"We directly presented to the Irish Government the results of the survey we did in 2014 and, even at that time, we were able to provide a huge amount of information. The point is, the Irish Government has been remiss. It has not only failed to adhere to its own legislation. It has also failed to adhere to EU legislation, which is why we have submitted eight petitions to the European Committee on Petition," Doherty said.

"Usually, the European Committee on Petitions reviews petitions and puts them online to garner as many signatures as possible. Based on that, petitioners normally get an invitation to present their case to the Committee.

"However, in our case, the Committee has reviewed our petitions and has not even required us to put them online for signatures."

Meanwhile, members of the Irish Cabinet were set to discuss a memo regarding the mica redress scheme on November 9, but that has been delayed.

Responding to the delay, Sinn Fein TD for Donegal Pearse Doherty aid on November 3: "I am deeply disappointed, to say the least, that the Government is going to miss the deadline once again to do what is right by the families in Donegal and elsewhere who are suffering as a result of no regulation or light-touch regulation.

"Their houses are crumbling around them.

"The extended deadline, 9 November, is now going to be missed by the Cabinet because it has not got its act together. That is not acceptable to the many families who are in mental turmoil waiting for the Government to do the right thing. It is not on."