Mercury Transit only occurs a handful of times each century. 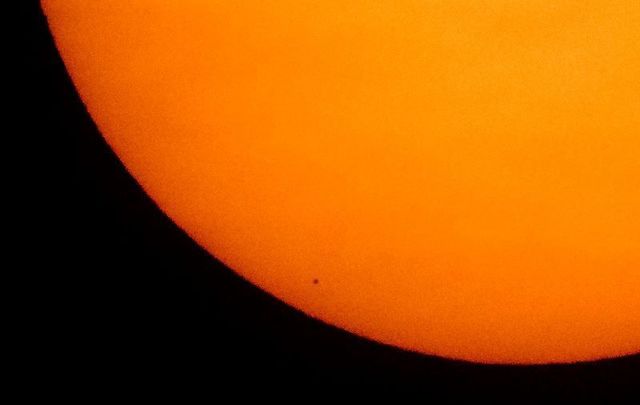 In this NASA-provided image, planet Mercury is seen in silhouette, low center, as it transits across the face of the Sun on November 11, 2019, from Washington Getty Images

The transit of Mercury across the sun will be visible from certain parts of the world, including Ireland, on November 11.

NASA says that Mercury won’t be in transit again until 2032, with North America having to wait until 2049 to witness the event again.

For the next few hours, Mercury will pass between the Earth & the Sun, silhouetting it against our home star. As you watch the #MercuryTransit:

Read More: Best and brightest of Perseid meteor shower will be visible from Ireland

Both Astronomy Ireland and Trinity College hosted events with special telescopes where visitors could observe the event that is not visible to the naked eye.

David Moore, the chairperson of Astronomy Ireland, told Newstalk Breakfast that the “rare transit” would be visible for about six hours in Ireland.

“All the geometry means it's going to take about 12:30 today [November 11] until 6 pm for Mercury to cross the sun, as seen from the earth.

“We're moving as well, so it's a complicated orbital dance that the three of us, the sun, the earth, and Mercury are playing and it translates into this six-hour window."

Moore added: “The last time it did it was only three years ago, but the next time will be 13 years from now. If you're living in North America, you won’t get to see it again for 30 years. So, they're quite rare events.”

“We'll miss the end because the sun will set soon after 4 pm," he said, "(but) we'll get to see the start and the middle - the best bits.”

Moore cautioned that the event would not be visible to the naked eye, and warned against looking directly into the sun to observe the transit.

“You have to be careful...Don't point telescopes or binoculars at the sun; don't even stare at the sun.

"Mercury is too small - it's 200 times smaller than the sun. It's a tiny dot that wouldn't be visible to the naked eye. You do need optical aid - that's why we're setting up telescopes at our headquarters in Blanchardstown.”

Trinity College also hosted a viewing of the event in Front Square. There, visitors could view the event through a high-power microscope as the progress of Mercury's pathway was displayed in real-time from locations around the world on a large screen.

In a press statement, Joe McCauley, the senior experimental officer in Trinity’s School of Physics, said: “Mercury will appear as a black dot on the face of the Sun, much too small to without magnification. But the telescope, with a special solar filter, will let members of the public see what the Sun looks like and enable them to see the tiny planet moving through space across the vast face of our Sun.”

What is the Mercury Transit?

“Transits of Mercury can happen in May or November with May transits being about half as frequent as November transits. They currently occur within a few days either side of May 8 and November 10.

Read More: Cosmic storm of celestial fireworks to wow Irish and US stargazers

Time and Date shared this timelapse video of Mercury Transit 2019:

Were you able to observe Mercury Transit 2019? Tell us about it in the comments!