A GoFundMe has been launched for the Meghan Torno School of Irish Dance, whose St. Louis studio was flooded and destroyed during unprecedented rainfall. 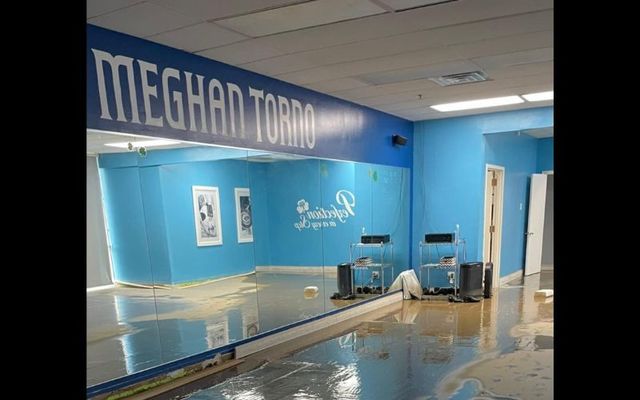 Flooding inside the Meghan Torno School of Irish Dance's studio in St. Louis, Missouri, which was hit by historic rainfall on July 26. Meghan Torno

The Meghan Torno School of Irish dance is hoping to rebuild after three feet of rainfall flooded its studio in St. Louis, Missouri.

Everything inside the Irish dance studio, which owner TCRG Meghan Torno describes as a "home away from home" for her students, was destroyed on July 26, the rainiest day in the city's metro area in more than a century.

We are completely heartbroken 💔

"As this rainfall and subsequent flooding was unprecedented, we did not have flood insurance," a GoFundMe page launched to assist the Irish dance school in rebuilding notes.

As of Monday morning, more than $14,700 has been raised on the GoFundMe page. Donors, many of whom are fellow Irish dance schools, have left words of encouragement as Torno and her school begin to rebuild.

"Keep on dancing!," one donor wrote.

Torno, who opened her Irish dance school in 2006 shortly after receiving her TCRG (Teagascóir Choimisiúin le Rinci Gaelacha, Irish dance teacher certification), told IrishCentral this weekend that she "can't believe" the timing of the catastrophe.

“Just when things are finally returning to normal after Covid,” she said, “we were just about to start céilí teams again! And now this.”

Thankfully, Torno said that her friend Jennifer Bartley, who owns the O'Faoláin Academy of Irish Dance, also in St. Louis, has "graciously" opened the doors to her dance studio for Torno's displaced students.

Torno has modified her schedule to work in classes around the O'Faoláin Academy's schedule, but says that things will get "trickier" when school resumes and Bartley's school returns to a normal schedule after the summer.

A FLOOD could NEVER stop us from learning NEW steps‼️ . We can’t even begin to express our GRATITUDE towards JENNIFER and the O’Faolain Academy of Irish Dance❤️ They offered us a home away from home last night to hold our classes. Her graciousness is a testament to the Irish Dance community☘️ . . . . #support #stlouisflood #flood #stlflood2022 #meghantornoschoolofirishdance #meghantorno #irishdancing #stlouisirishdancers #ofaolainacademyofirishdance #danceschool #friendssupportfriends #thankyou #help #grateful #unstoppable #irish #dance

"These kids have been through so much already these last two years," Torno said, that I just want to be able to provide some normalcy for them and not another catastrophic once-in-a-lifetime upheaval to their lives.”

You can support the GoFundMe for the Irish dance school's studio here. You can learn more about the Meghan Torno School of Irish Dance on its website, Facebook, and Instagram pages.