McCarrick, who was defrocked in 2019, is accused alongside several other clergymen of sexually abusing minors at a beach house in Sea Girt, New Jersey nearly 40 years ago. 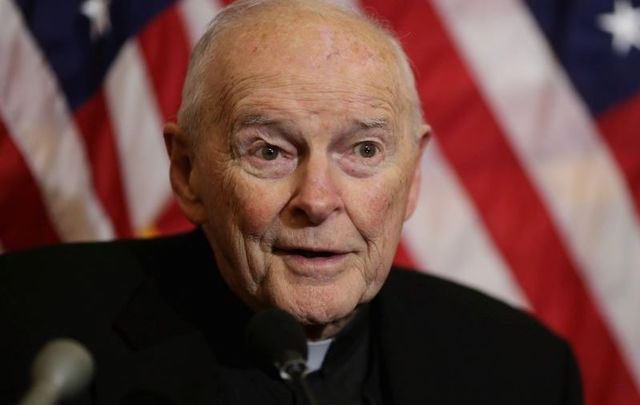 Former Cardinal Theodore McCarrick is accused of sexual battery in the latest lawsuit.

Former Cardinal Theodore McCarrick, who was defrocked in 2019, is now facing new sexual misconduct allegations in a lawsuit that was lodged in the Middlesex County Superior Court in New Jersey on July 21.

In a tele-press briefing on July 22, Jeff Anderson of Anderson & Associates said the lawsuit he filed the night before brings “into bright and broad focus over 50 years of criminal, sexual predation by Cardinal Theodore McCarrick - all of it cloaked in papal power.”

Anderson & Associates has previously represented plaintiffs who have accused McCarrick of misconduct.

Anderson said there “are at least seven minors, children, who McCarrick groomed and who were groomed for McCarrick by others in which he engaged with sexual criminal conduct.”

In addition to McCarrick, the lawsuit accuses Rev. Anthony Nardino, Brother Andrew Thomas Hewitt (deceased), Rev. Gerald Ruane (deceased), Rev. Michael Walters, and Rev. John Laferrera as having had “unpermitted sexual contact” with the Plaintiff, named only as “John Doe 14,” between approximately 1978 and 1983.

According to the lawsuit, John Doe 14 was raised in a “devout Roman Catholic family” and attended Saint Francis Xavier elementary school and Essex Catholic Boys High School, both in New Jersey, where he participated in youth and / or church activities.

The lawsuit accuses Father Nardino of engaging in “unpermitted sexual contact” in 1978 with the plaintiff, who was 11-years-old at the time and an altar server at Saint Francis Xavier.

Later, from approximately 1981 - 1983, Br. Hewitt engaged in “unpermitted sexual contact” with the plaintiff who was a student at Essex Catholic at the time.

In 1982, Br. Hewitt, who was principal of Essex Catholic at the time, “orchestrated a meeting between the John Doe 14 and McCarrick under the guise that McCarrick would help John Doe 14 pay his school tuition,” according to the lawsuit.

After the meeting, John Doe 14 was taken on overnight and weekend trips to a beach house in Sea Girt, New Jersey, where McCarrick “assigned sleeping arrangements, choosing his victims from the boys, seminarians and clerics present at the beach house.”

The lawsuit alleges that “minor boys were assigned to different rooms and paired with adult clerics.”

McCarrick, Ruane, Walters, and Laferrera are accused of engaging “in unpermitted sexual contact” with John Doe 14 at the Sea Girt house between 1982 and 1983. McCarrick was, at the time, the Bishop of the Diocese of Metuchen.

The lawsuit goes on to detail McCarrick’s rise in ranks, as well as the numerous accusations he faced afterward. He was laicized in February 2019.

The lawsuit formally accuses McCarrick of sexual battery which is alleged to have occurred between 1982 and 1983, and the Diocese of Metuchen and the Archdiocese of Newark of multiple counts of negligence.