Massive, record-setting waves recorded off of Irish coast during Ophelia

Some of the waves were as tall as a six-storey building! 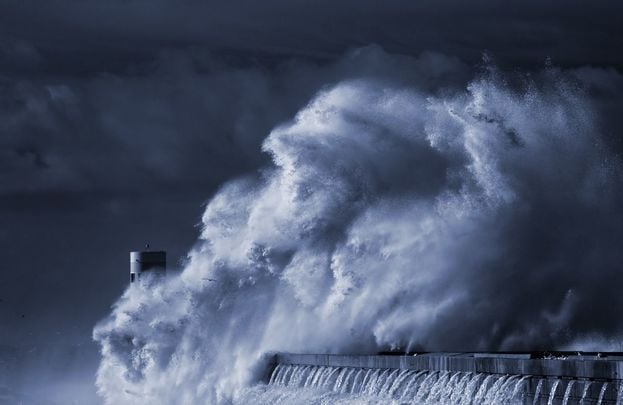 The 85-foot wave recorded in Ireland is even bigger than this wave! iStock

The largest wave ever recorded off the Irish coast surged on Monday during Storm Ophelia.

That same gas platform had been the site of Ireland's previous record-setting wave of 82 feet, during Hurricane Darwin in 2014. Another record-breaking wave was reported in 2016.

To put it in context, 85.6 feet is approximately the size of a six-story building.

A wave of that height is fitting for what meteorologists and climatologists have concluded was the strongest eastern Atlantic storm on record, dating back to the 1800s, as Dr. Kieran Hickey of Universty College Cork told the Irish Times.

He also said that the fastest wind of Ophelia was recorded at 119 miles per hour, at the Fastnet lighthouse off the south-east coast.

A commercial ship passing by Cork recorded this terrifying footage:

A nauseating ride for crews on a commercial ship passing by Cork, Ireland. The ship battled rough surf created by ex-Ophelia.

And boats were mercilessly rocked by the churning waters

Strong waves from Ophelia rocked these boats in Ireland

Posted by The Weather Channel on Monday, October 16, 2017

*Update: This article has been updated to correct an error where km was used in place of m (meters)