Mark Sheehan says "justice will happen" after suffering what he believes was a homophobic attack on a Dublin Bus in the early hours of Sunday, August 14. 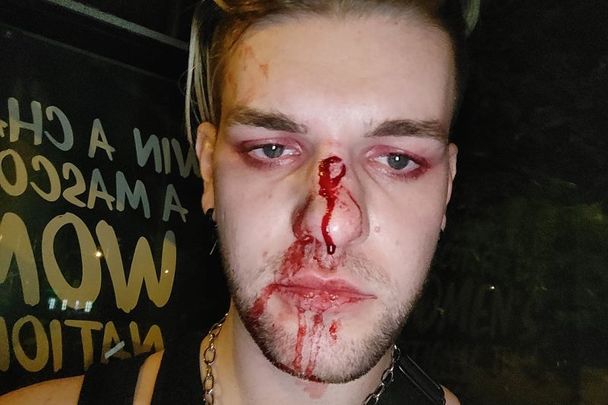 Mark Sheehan shared pictures of his injuries on social media after being attacked on a Dublin Bus route. Mark Sheehan Facebook

Mark Sheehan says he was threatened, headbutted, and called a "f-ggot" while riding a Dublin Bus in the early hours of Sunday, August 14.

Sheehan says he had been out socializing in Dublin City with three friends and was returning to his South Dublin home at about 3 am on Sunday when he was verbally abused by a group of young men on the number 15 bus route.

In a social media post, Sheehan wrote: "Last night, just before 4 am, I was attacked on the 15 bus in Tempelogue.

"A group of young men sat behind me and proceeded to mock and jeer at my friends and I for the duration of the journey out of town.

"I used my earphones to drown them out, and when taking them off to place back in the case I heard even more insults. 'Queer' 'emo freak' 'f-ggot' to name a few.

"I turned around and said to act their age. This prompted one of the young men (red top with back turned to camera) to kick the earphones from my hand and across the bus. I immediately tried finding them as we were at our stop, and was being laughed at by what felt like the whole bus while crawling to find them.

"My friends were just insisting we get off as they were terrified, and I tried pleading with people to find them. I was asking why he kicked them from my hand. This resulted in another person (ginger hair in grey tracksuit) to start threatening me. At this point I was leaving the upper floor and the person who had kicked me ran up and headbutted me.

"I looked down and saw blood covering my shoes. I went down to the driver asking him to call the gardai immediately and not to move the bus. He told me to get off before they come down and cause more trouble. No one intervened and the driver took off with the attacker still on the bus."

Sheehan said he was "completely shook up" by the incident and that he spent six hours in the hospital for his injuries. He said Gardai had taken a report and were trying to get CCTV from the bus.

He continued: "I don't understand why they singled us out and antagonized us so much. I have lost my property and potentially have a broken nose. I am to go for a scan after the swelling subsides."

Sheehan said he wanted people to share his social media post "for visibility and awareness of how dangerous this city still is for LGBTQ+ people."

PLEASE READ AND SHARE! Last night, just before 4am, I was attacked on the 15 bus in Tempelogue. A group of young men...

In a subsequent social media post on Tuesday, Sheehan said he was "so touched" by all the shares and kind words being sent his way. He said he was exhausted after talking to the media and trying to push his story.

"I feel far more confident after seeing my story run in articles and on the news," Sheehan wrote. "It has been validated by people who were on that bus and reached out after seeing the articles. I cannot tell you the relief to hear the passenger say 'this would not have happened if you were not gay.' It was a targeted attack. I have 4 witnesses as of now and hopefully more soon. I have made sure all details are crystal clear to illustrate just how much I was pushed and mocked to try get some sort of response by these scumbags. Well, the most they got was a 'cop on', and I got a headbutt. I had my belongings kicked across the bus and lost, they got to continue home on the bus.

"They were very very stupid to do this, on a bus with cameras and witnesses no less. Justice will happen."

So beyond touched with all the shares and kind words being sent my way. Today was spent talking to the media and pushing...

Gardaí have confirmed that they are investigating the assault of a man on a Dublin Bus in the early hours of Sunday morning.

"The injured party was taken to Tallaght University Hospital for treatment of non-life threatening injuries. No arrests have been made at this time," a Garda spokesperson said in a statement.