US actor Mark Ruffalo has joined more than 70 Irish and American environmental organizations campaigning against a proposed liquefied natural gas (LNG) terminal on the River Shannon in County Kerry. 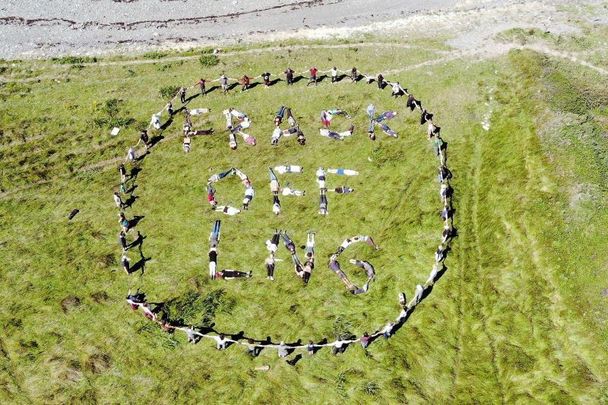 August 7, 2022: Climate activists take part in a mass trespass of the site of the proposed Shannon LNG gas import terminal. The group engaged in several actions, including spelling “Frack Off LNG!” with their bodies, followed by a ceilí. Climate Camp Ireland / Kevin Handy

US actor Mark Ruffalo has joined more than 70 Irish and American environmental organizations campaigning against a proposed liquefied natural gas (LNG) terminal on the River Shannon in Co Kerry.

The groups, including Friends of the Earth and Extinction Rebellion, penned an open letter on August 11 to Taoiseach Micheál Martin, Tánaiste Leo Varadkar, and Minister for the Environment Eamon Ryan to outline their concerns that fracked gas will be used at the terminal at Ballylongford on the Shannon Estuary.

The groups also urged Martin, Varadkar, and Ryan, who are the leaders of the three government parties in Ireland, to meet with fracking victims in the US and listen to leading experts about their concerns over the LNG terminal.

The Shannon LNG plan, which is almost 20 years old, seeks to build a terminal capable of importing frozen natural gas, liquefying it, and then feeding it into the Shannon Foynes gas pipeline.

The plan was first launched in 2006 and a decision on the terminal is expected by September 9.

Taoiseach Micheál Martin, who launched the project as Minister for Enterprise in 2006, said the terminal would use gas that "is not derived from fracking", adding that the project is consistent with the Programme for Government set out two years ago.

He said the terminal was one of a number of options being considered following the Russian invasion of Ukraine, which has "dramatically changed" Ireland's short-term energy security.

The project will be overseen by New Fortress Energy, which uses fracked gas for its operations in North America.

Anti-fracking activists said they did not accept assurances that the company would not be bringing fracked gas to the terminal.

"While New Fortress Energy is now claiming that they won’t use fracked gas, this is contrary to their business model," the environmental groups said in their August 11 letter to Irish government leaders.

Ruffalo, who is a renowned anti-fracking activist, called on the Irish Government to meet with climate change experts and fracking victims to discuss the dangers of the Shannon LNG terminal.

"The leaders of the Irish government should meet with impacted residents, climate and energy experts about the real harms and dangers that LNG imports pose to the environment and climate," Ruffalo told IrishCentral.

"As someone who lives nearby where the export terminal for Shannon LNG is proposed, I know all too well the suffering fracking and gas extraction has had on my neighbors in Pennsylvania. Ireland rightly banned fracking because of the environmental and public health impacts and should reject this terminal for those very same reasons."

#FrackOffLNG! Proud to have supported the Climate Camp in Ireland. Irish and US-based groups are working together in solidarity to stop fracked gas imports. @MichealMartinTD @LeoVaradkar @EamonRyan don't listen to the lies from this industry. Keep Ireland frack-free! https://t.co/1uFDqjfZPh

Hundreds of protesters, including environmental experts and fracking victims, gathered at the proposed site for the terminal last week as part of Climate Camp.

Environmental scientist Dr. Laura Kehoe of Nature Conservancy gave a workshop at Climate Camp and said the construction of new fossil fuel infrastructure in the midst of a climate crisis was ill-judged.

"The Government is not leading on this issue," Kehoe said.

Ray Kemble, a Pennsylvania resident whose water well was poisoned by fracking, also addressed the protest and described fracking as a "human rights disaster".

"I’m here to tell my story and as a proud Irish-American, I’m hopeful that the people of Ireland will listen. This isn’t just an environmental and climate issue, this is a human rights issue. Those of us who live in the areas of the United States that are being fracked are fighting for our lives. It’s a public health disaster," Kemble said last week.

Meanwhile, the anti-fracking groups said they were concerned that Varadkar had met with New Fortress Energy CEO Wes Edens while the Shannon LNG project was under review. The groups have filed a formal complaint with the Standards in Public Office Commission over the issue.

A spokesperson for Varadkar told IrishCentral that the Tánaiste met with New Fortress Energy to assess whether the Shannon LNG terminal could be adapted for green hydrogen.

"The Tánaiste met with the company to hear about their plans for Tarbert and how they might fit in with our energy security and climate objectives, if at all. He was particularly keen to assess whether the facility could be adapted for green hydrogen, as he believes there could be real potential for this in the Shannon Estuary," the spokesperson said.

The groups believe New Fortress Energy will use fracked gas at the Shannon LNG terminal and said the use of natural gas exacerbates the climate crisis, whether it is fracked or not.

"Gas extraction releases significant methane emissions, which are over 80 times worse for the climate than carbon dioxide," the groups said.

"If it spills, the liquid can turn into rapidly expanding vapor clouds that can flash-freeze human flesh."