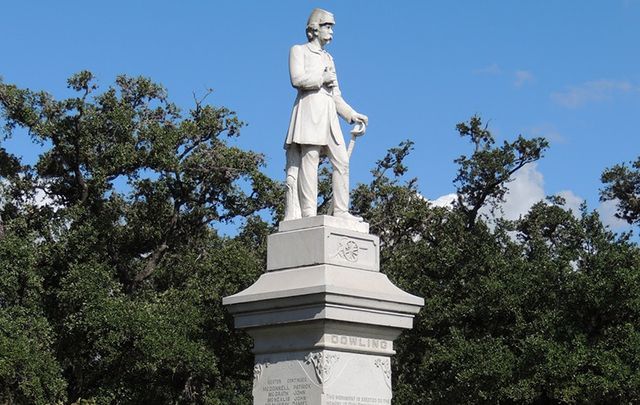 Houston police and the FBI have arrested a man in possession of liquid explosives who they say was planning to blow up a statue of Confederate hero Dick Dowling, a native of Galway in Ireland. The suspect was found hiding in the bushes near the statue in Houston's Hermann Park.

The statue in question is dedicated to Richard William "Dick" Dowling who in 1863 led his unit to one one of the rebels' most famous victories when his small band stopped a much larger Union force attacking Texas at the Battle of the Sabine Pass.

Controversy over Dowling’s legacy flared last week when it was revealed he rented slaves, including a 12-year-old child, from a slave dealer.

Dowling Street in Houston has been renamed as it plays home to a middle school and African American residents complained saying Confederate heroes were not celebrated by them.

The only Confederate memorial in Ireland is a plaque to Dowling in his native town of Tuam, County Galway. Local politicians are calling for it to be taken down.

FBI officials told reporters on Monday afternoon, in Houston, that Andrew Cecil Earhart Schneck is now charged with using explosives to blow up a statue on federal property. Park rangers testified they saw Schneck kneeling in the bushes in front of the statue preparing to blow it up.

Houston officials ordered the upscale block where Schneck lived to be cleared on Monday morning before “controlled detonations” of materials found inside the home were carried out. Officials warned that the FBI's actions could produce loud noise, smoke, and possible property damage to nearby homes, Breitbart Texas reported.

Read more: Want to get rid of Confederate statues? Send in the Irish