Want to get rid of Confederate statues? Send in the Irish 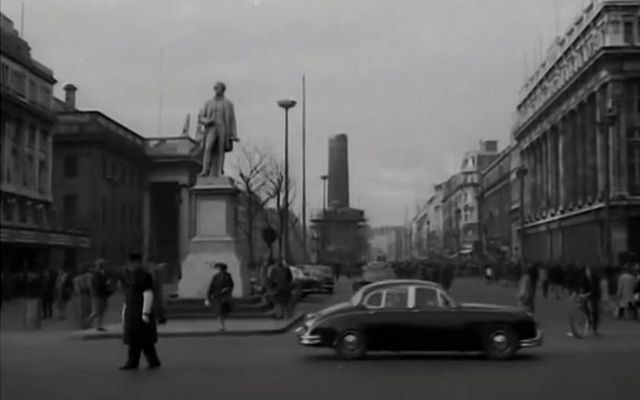 The stump which remained after the bombing of Nelson's Pillar, Dublin city. Britiah Pathe / YouTube

You want to get rid of those Confederate statues? Send in the Irish.

It only took the Irish 700 years to chase the British out of (most) of their island, but, man, can we deal with statues.

British statues hate us because we take no prisoners. They quake at the thought of an Irishman and a lump of gelignite—or even a hacksaw. We are the best statue terrorists in the world!

And, of course, I’m talking about nationalist statue bombers. There have been a few sorties by our Orange brothers in the North, but, alas, like their sorry parades, they are noisy but not very effective.

Sculptors shake at the mention of the Irish; politicians quiver; nationalists cheer!

In Ireland, the monuments to the British started going up right after the failed Rising of 1798. Nelson’s Pillar, which celebrates Lord Admiral Horatio Nelson’s victory in the Battle of Trafalgar, rose next to the General Post Office in Sackville (now O’Connell) Street in 1809. As the years went by and nationalists started to push back against the British, statues of Irish heroes rose to compete with Nelson.

At the south end of the thoroughfare sits Daniel O’Connell, the Liberator of Catholics in the 19th century. Dan is surrounded by busty angels, some of whom still bear the bullet scars on their bosoms from Ireland’s rebellions.

Daniel O'Connell, Librator of the Catholic, surrounded by angels of virtue.

To the north end stands “The Uncrowned King of Ireland,” Charles Stewart Parnell, as portrayed by the brilliant Irish-American sculptor, Augustus Saint-Gaudens. The monument reads: “No Man has a right to fix the/Boundary to the march of a nation.”

But Lord Nelson still dominated from his great perch. That was, until March 8, 1966. As the Republic was getting ready to celebrate its 50th anniversary as a nation, Lord Nelson, with the help of some IRA gelignite, became the first Irish astronaut.

If you have a great desire to visit the head of Lord Nelson, he quietly sits in the second floor reading room of the Pearse Street Library, a few blocks east of Pearse Station on Westland Row.

Nelson was the last great British statue to go up in a blaze of gelignite glory. Probably inspired by Nelson’s propulsion, Protestant militants attacked Daniel O’Connell’s statue on December 27, 1969, but caused only minimal damage. Two years later they tried to launch Eddie Delaney’s heroic monument to Wolfe Tone on St. Stephen’s Green into oblivion. They failed. It is said by locals that after his genitalia was resoldered, Wolfe Tone was fit to go and returned to the Green, not far from the Shelbourne Hotel.

Nelson's Pillar towering over the city of Dublin.

Nelson’s launch was preceded by nationalist attacks on King George II and William of Orange, both of which were blown up. The statue of Queen Victoria, which bizarrely haunted the front of Leinster House, the home of the Irish parliament, the Dáil, was not blown up and had an even more delicious fate—like many Irishmen under her reign, she was poetically exiled to Australia where she is currently on display in Sydney.

After Nelson, the most famous royal statue to be the target of Irish nationalists was Lord Gough, stationed in the Phoenix Park. Field Marshal Hugh Gough, 1st Viscount Gough, KP, GCB, GCSI, PC, was born in Ireland and died in Ireland, but spent most of his life promoting British imperialism around the world. Somehow, the only letters he didn’t have after his name was SOB.

The statue was the work of John Henry Foley who also did Dan O’Connell’s monument, plus the statues of Goldsmith and Burke, the twin sentries at the front gate of Trinity College. From its unveiling in the late 19th century—a young Winston Churchill was present at the ceremony—it has sparked Fenian outrage. Finally, on Christmas Eve 1944, instead of going to midnight mass, a group managed to saw Gough's head off. It was later found in the River Liffey. Unlike Humpty Dumpty, Lord Gough was put back together again, but was bombed in 1957. Lord Gough’s time in Ireland was up. He was purchased by Robert Guinness and moved to Chillingham Castle in  Northumberland in England.

Lord Gough, however, is still known in Dublin because of a ditty that Ulick O’Connor has credited to Brendan Behan in his Behan biography. However, others say that it is the work of Dublin poet Vincent Caprani. Whoever wrote it, thanks for the smile:

Some Gallant hero did place

For the cause of our land, with a light in his hand

Bravely the foe he did face.

Then without showing fear, he kept himself clear

Excepting to blow up the pair

But he nearly went crackers, all he got was the knackers

And made the poor stallion a mare.

So, are Americans ready to take a page out of Irish history? Repeal and replace the confederacy statues? There needs to be a statute of limitations on all this!

Read more: Call for removal of Confederate plaque in Ireland