Irish woman Lisa Smith has been sentenced to 15 months in prison after she was convicted of membership of the terrorist organization ISIS. 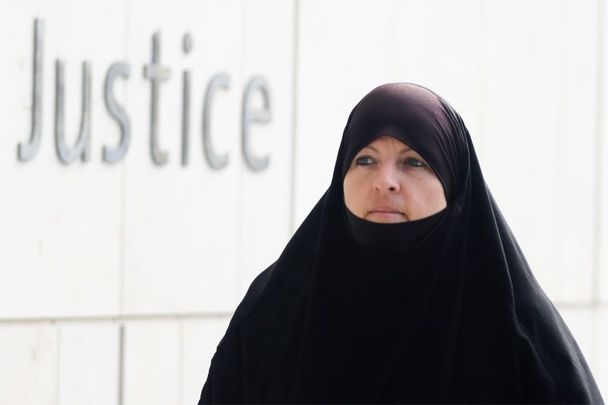 July 22, 2022: Former Irish soldier Lisa Smith arrives at the Central Criminal Court. Smith was found guilty of being a member of the Islamic State terrorist group in May, and was sentenced to 15 months in prison. RollingNews.ie

Jailed ex-soldier Lisa Smith will be allowed to say prayers five times a day, as well as being provided with special Islamic food while serving her sentence for being a member of ISIS.

Smith, the 40-year-old mother of one whose wife-beating ISIS soldier husband is now dead, was jailed last Friday, July 22 for 15 months at the Special Criminal Court in Dublin. She is the first person to be convicted in an Irish court of membership in another country of an Islamic terrorist organization.

Smith will be allowed to practice her Islamic religion, which involves praying five times a day in prison with the earliest prayer session beginning at dawn and the latest at dusk.

During her trial, the court rejected Smith’s claims she had traveled to Syria simply out of a sense of religious obligation and for the purpose of living under Sharia law.

The presiding judge in the three-judge court, Justice Tony Hunt, said it was a serious matter for an Irish citizen and former Defence Forces member to take up allegiance to a foreign terrorist organization.

He said Smith had “followed rather than led” but knew exactly the nature of ISIS.

Earlier, following Smith’s conviction of membership of an unlawful terrorist group, Islamic State, the court noted the prosecution had established beyond reasonable doubt that her “eyes were wide open” when she traveled to Syria and pledged allegiance to the organization led by Abu Bakr al-Baghdadi.

Hunt rejected claims that she was naive or that she was unaware of what Isis was doing and said she “knew full well she was not simply adhering to life under Sharia law.”

Smith, from Dundalk, Co Louth, was once a member of the Irish Army and Irish Air Corps and traveled as an aide to ministers on overseas appointments on the government jet.

She left the Defence Forces in 2011 and bought a one-way ticket to Turkey, crossing into an ISIS-controlled area of Syria in 2015 where she had a daughter born in 2017.

By 2019, she was in a squalid refugee camp in Turkey, from which she was flown home to Ireland to be questioned by Special Branch detectives and face trial.

The Sunday Independent reported garda sources saying that when she gets out of jail she will remain on their watch list for some time to come.