Locals in Rathkeale, Co Limerick, said the town was turned into a war zone earlier this week after several cars were written off in ramming incidents, with three feuding gangs believed to have been involved. 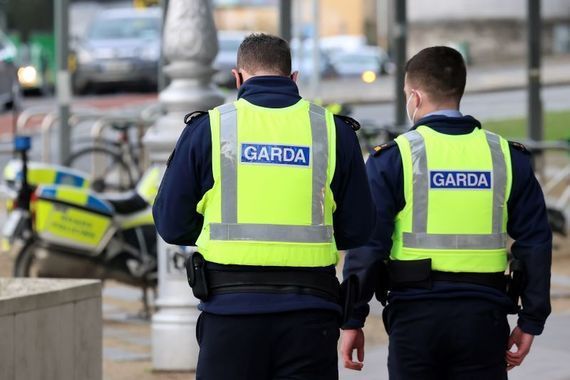 It's an unusual sight in Ireland, but armed gardai patrolled the streets early this week in Rathkeale, Co Limerick when locals said the town was turned into a “war zone” by three feuding rival gangs.

Several vehicles were written off in ramming incidents, and machetes were allegedly produced, as gardaí sealed off a large section of the town.

Local Fianna Fáil Councilor Kevin Sheahan, a former garda, suggested that feuding perpetrators should be cleared from the streets with “batons” to restore order.

At least three separate groups are involved in the feud that local sources said they fear will result in persons being seriously injured or worse.

One gang is reported to be linked to a notorious crime family believed to have attempted to extort lands and properties from locals, and have been causing havoc in the town for several weeks.

Locals said the town was on a “knife-edge” over the last few weeks after gardai seized weapons at a property in the town, shots were reportedly fired at a car, a mobile home was attacked by men wearing balaclavas and armed with slash hooks, and a garda was seriously injured in a ramming incident.

Sheahan warned at a local meeting last month that “law and order has gone out the window” in Rathkeale.

Videos of the aftermath of violent incidents on Monday were shared on social media showing several cars extensively damaged and left abandoned on the street, and large groups of people recording the carnage on their mobile phones.

Niall Collins, who is a TD for the area, said that six SUVs were badly damaged in Monday’s incident.

He told RTÉ that people in the area were “rightly angered” because Rathkeale is a “fine town with some very fine people in the community groups working very hard to enhance and promote the town.”

In #Rathkeale today with Minister for Justice Simon Harris to meet with local community representatives and An Garda Síochána - we have assured the local community that Government will support any additional policing response required. pic.twitter.com/dnBfp51Gg2

Chairman of the Joint Policing Committee of Limerick City and County Adam Teskey said it is “grotesque and barbaric behavior” which is “completely out of the norm for the area.”

He said law and order must be restored and he called on Minister for Justice Simon Harris to visit the town.

Harris visited Rathkeale on Tuesday and said afterward that the "investigation is active."

I travelled to Rathkeale today to meet with local Gardai & community leaders.

Gardai have been assured of my full support in their efforts. The investigation is active.

I would encourage anyone with information to come forward to assist. pic.twitter.com/KgLpARy1C3