Jonathan Dowdall and his father Patrick both received jail sentences after admitting to assisting a criminal gang in the murder of David Byrne at the Regency Hotel in Dublin in 2016. 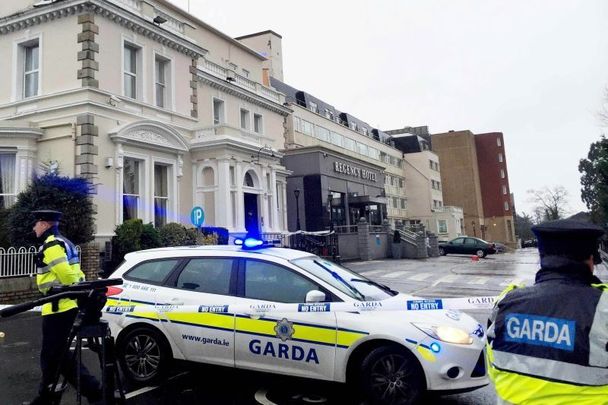 Jonathan Dowdall, a former Sinn Féin councilor, has been jailed for four years after admitting to helping a criminal gang murder a rival gang member in a Dublin hotel six years ago.

Dowdall, 44, and his father Patrick, 65, both admitted to assisting a criminal gang in the murder of David Byrne that occurred on February 5, 2016, at the Regency Hotel in Dublin.

Jonathan's father Patrick Dowdall (65) was sentenced to two years in prison for his role in facilitating the murder of Mr Byrne.

These are the first convictions in the investigation into the Regency Hotel shooting.

Dowdall has stated that he is willing to testify in the trial of three other men connected to the murder, including Gerard "the Monk" Hutch. The trial, which is due to begin at the Special Criminal Court on October 18, has been dubbed Ireland's gangland trial of the century.

Delivering Dowdall's sentence on October 17, Justice Tony Hunt said the court accepted that Dowdall's decision to testify put him and his family "in peril", adding that his life and the lives of his family have been "upended" and are now "more onerous and dangerous".

However, Justice Hunt said he had to impose a custodial sentence and handed Dowdall a four-year prison term. Patrick Dowdall received a two-year prison sentence.

The Special Criminal Court heard details of the role Jonathan and Patrick Dowdall played in the murder of David Byrne at a sentencing hearing two weeks ago.

Patrick Dowdall booked a room at the Regency Hotel in his own name, paying for it in cash. His son Jonathan, who drove Patrick to the hotel, handed the room's key card over to Kevin Murray, a dissident republican who was part of the hit team that killed Byrne the following day.

Defense counsel for both men argued that they did not know that the room would be used for the attack, which was accepted by the prosecution.

The judge said Dowdall met a member of the Hutch gang while under surveillance and traveled to Northern Ireland. Gardaí recovered firearms connected to the shooting two days later.

Even if Dowdall was unaware of the plot to murder David Byrne, he was complicit in the crime, Justice Hunt said.

Jonathan Dowdall was due to stand trial for murder in relation to the Regency Hotel shooting but entered a guilty plea to the lesser crime of facilitating the attack. His father pleaded guilty to the same offense.

The two guilty pleas mark the first convictions in relation to the infamous shooting, which escalated the feud between the Hutch and Kinahan criminal gangs, which has claimed the lives of 18 people.

The court placed the headline sentence for Dowdall's offense at eight years, reducing it by 25% for his guilty plea and a further 25% for his "decision to make a statement and give evidence against others involved in these crimes".

However, Justice Hunt argued that Dowdall's decision to give testimony did not justify a fully suspended sentence.

The judge said Patrick Dowdall had cooperated with the investigation, adding that the court considered his offense to be at the lower end.

The court placed Patrick Dowdall's headline sentence at four years, reducing it by 25% for his guilty plea and a further 25% because his son's decision to testify will "make the serving of his sentence more onerous".

The two men are to be presented to the Governor of Portlaoise Prison in two weeks to begin their sentences. The court allowed for the execution of the sentences to be postponed by two weeks to allow the Dowdalls to consult with professionals.

Jonathan Dowdall became a Dublin City Councillor with Sinn Féin in 2014 but vacated his seat and resigned from the party a year later. He was previously convicted of kidnapping and torturing a man in 2015.

His father Patrick suffers from many health issues that are likely to considerably shorten his lifespan, his counsel Michael Bowman SC told the court.