Real IRA bomber can be extradited to Lithuania on terrorism charges

Liam Campbell, who was found liable in the 1998 Omagh bombing, can be extradited to Lithuania where he faces charges, Ireland's Supreme Court has ruled. 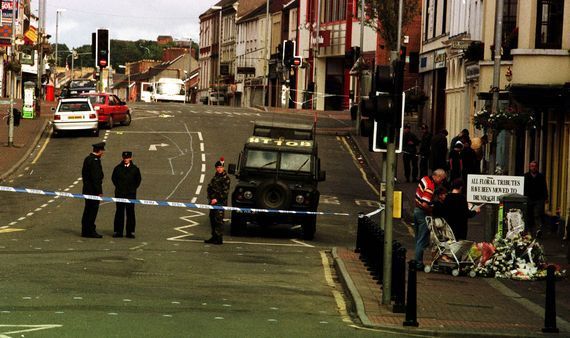 August 19, 1998: British army and police at the scene in Omagh, Co Tyrone where a bomb was exploded by the Real IRA on August 15, 1998. RollingNews.ie

Liam Campbell, one of a group found civilly liable for the Real IRA bombing in Omagh which killed 29 people, can be extradited to Lithuania where he is accused of offenses including terrorism, possession of weapons, and smuggling, Ireland’s Supreme Court has ruled.

It’s expected Campbell will be surrendered by Irish authorities to Lithuania within days following the order on Monday by the highest court in Ireland.

In a lengthy legal battle, Campbell had opposed Lithuania’s request for his surrender, claiming that he should not be surrendered on the grounds that no decision had been taken in Lithuania to try him. His argument was dismissed by the five-judge Supreme Court.

Under the terms of a European arrest warrant, the Lithuanian authorities allege that while acting in an organized terrorist group, the Real Irish Republican Army, Campbell attempted to acquire a substantial number of firearms and explosives and smuggle them into Ireland.

It is further alleged that from the end of 2006 to 2007 Campbell made arrangements with others to travel to Lithuania for the purposes of acquiring firearms and explosives, including, automatic rifles, sniper guns, projectors, detonators, timers, and trotyl (TNT).

He was first arrested in Northern Ireland on foot of a warrant seeking his surrender in 2013. The request was refused by a Belfast court after a judge ruled that Campbell was likely to be held in inhuman and degrading conditions if extradited to Lithuania.

He was later arrested in Dundalk in December 2016 on foot of the second European Arrest Warrant issued by Lithuanian authorities.

Both the High Court and Court of Appeal in Dublin had ordered that he be extradited to Lithuania. However, he appealed that decision to the Supreme Court.

His appeal to the Supreme Court was based on an argument that the Lithuanians intended to further question him before making any decision to charge or try him. Campbell’s lawyers argued that was in breach of extradition laws between EU member states.

Giving the Supreme Court’s decision, Justice Marie Baker said the judges were satisfied that a decision had been taken in Lithuania to charge and try Campbell in accordance with the relevant section of the 2003 European Arrest Warrant Act.

There was, she said, a high probability that Campbell will be charged and tried following the completion of mandatory preliminary questioning by the Lithuanian authorities.

Campbell first came to the attention of the British and Irish security forces in the early 1980s and became the subject of an exclusion order in 1983 barring him from entering Northern Ireland.

Campbell, from an ardent Republican family, was named by the BBC as one of the perpetrators of the 1998 Omagh bombing. He never faced criminal charges but was found liable for the bombing in a civil trial in 2009, along with Real IRA founder Michael McKevitt who died of cancer last year, and Colm Murphy and Seamus Daly.

The case, brought by relatives of the 29 victims, resulted in an award of combined damages of over £1.5 million sterling. Campbell was believed to be a member of the Real IRA army council during the bombing. The damages were never paid.