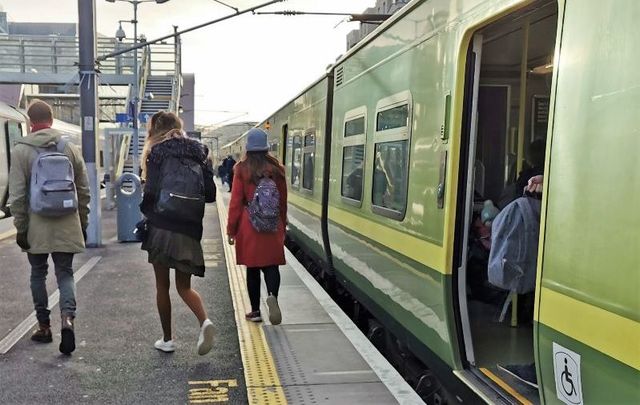 Alan Farrell, a Fine Gael TD for Fingal in Dublin, said afterward that Irish culture and society "need to take a look at this.”

In a string of tweets posted late on October 6, Farrell wrote: “I don’t think I’ve ever felt compelled to tweet about such things, but from my journey home tonight on the DART, we have a very long way to go to ensure toxic masculinity is eradicated from our society.

"Chants of ‘let’s rape her’ were heard amongst lads, after lone women exited the train, before our final destination. I even checked with fellow passengers if I had heard wrong. I was criticised for highlighting it, on egress.

“Such a depressing event, such young men. Supposedly in touch with what it means to be a 21st-century man.

“These were locals, no question. Some acknowledged it when I confronted them at Malahide, and I thank them for at least acknowledging the issue, others had a go at me for *my* politics. They especially, have a long way to go.

“Toxic masculinity is where bravado takes over and decency has no meaning. There was no excuse for it, especially given it was issued in hushed tones, after the women had left the train; but not all women; some remained.”

I don’t think I’ve ever felt compelled to tweet about such things, but from my journey home tonight on the DART, we have a very long way to go to ensure toxic masculinity is eradicated from our society. Chants of “let’s rape her” were heard amongst lads, after lone women

The day after his tweets caught attention online, Farrell spoke with Joe Duffy on RTE’s Liveline about the incident, which he said the likes of which he has never experienced before.

“There was a couple of them doing it, and certainly one individual started it,” Farrell said. “It was horrifying.”

Farrell said there were more than 10 people in the “boisterous bunch” which included some women.

He said: “Young men, in particular, have to take personal responsibility for the sort of damage that they can do to women in what was a horrifying, insidious, and threatening event and I might add, it is against the law.

“I know Irish Rail are investigating it and they will be reviewing CCTV, they have informed me, and are passing it to the Gardai once it’s complete.”

Farrell, who noted he is on the Committee for Education in Irish government,  went on to say: “We have to do more to try and change this culture this totally unacceptable commentary and treatment of women.”

He continued: "What I would suggest, and what I have suggested, would be the likes of ensuring that these conversations are had in schools. I know they are already, but perhaps we need to take another look at how that particular course and how decency will be instilled, in particular, in young men, in secondary and indeed in third level.”

“We as a culture, as a society, need to take a look at this.”

Farrell did not directly intervene on the train on Wednesday night. He explained: “I didn’t feel it was necessary [to intervene] since the women in question weren’t on the train. But I absolutely was appalled by it and I was sitting on the edge of my seat listening to every word making sure it wouldn’t escalate to something else.”

Barry Kenny of Irish Rail told The Journal on Thursday: “We contacted Deputy Farrell earlier this morning to get further information, so we can review CCTV and liaise with Gardaí on this appalling incident of verbal abuse and intimidation.  Deputy Farrell has been in contact to provide us with this.

“We have up to 20 security teams patrolling our stations and services daily, with greater focus on evening services.

“Our central security hub ensures stations are live monitored, and reports from security teams, staff, or customers via our text alert systems are responded to as appropriate, with security support or Garda intervention where required.”