Varadkar reached into his jacket pocket and unfolded a large sheet of paper with details of the roadmap in response to Tubridy's questioning. 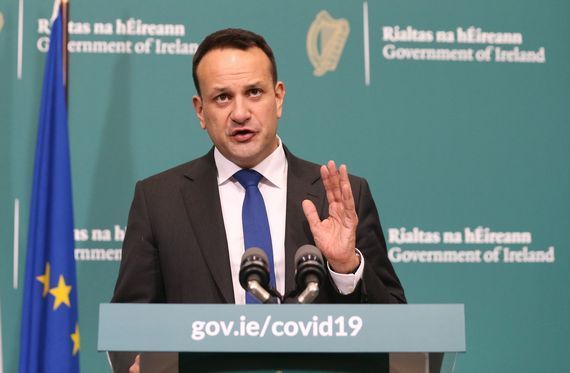 Taoiseach Leo Varadkar caused a stir on social media on Friday night when he consulted a sheet of notes during an interview on the Late Late Show to make sure he was giving viewers the correct information.

Host Ryan Tubridy quizzed Varadkar on the  Irish Government's detailed roadmap to easing COVID-19 restrictions and Varadkar was forced to consult his notes on numerous occasions.

Varadkar reached into his jacket pocket and unfolded a large sheet of paper with details of the roadmap in response to Tubridy's questioning.

The somewhat bizarre response has caused something of a social media stir in Ireland.

When can people visit a loved one that's dying?

A large number of Twitter users were impressed with the Taoiseach and felt that he showed humility by consulting his notes.

"I’m not a fan of Leo Varadkar, but can you imagine Trump or Johnson pulling out a big sheet of paper to make sure they had their facts straight?" said writer Donal O'Keeffe.

I’m not a fan of Leo Varadkar, but can you imagine Trump or Johnson pulling out a big sheet of paper to make sure they had their facts straight? Actually, can you imagine either of them getting into the granular detail of anything at all? #LateLateShow

Another Twitter user praised Varadkar for being humble enough to check his fact sheet when he wasn't sure of an answer.

An Taoiseach Leo Varadkar gave a very honest account of the situation. Humble enough to check his fact sheet when he wasn’t sure. He did perk up a bit too when asked about Government negotiations. He’s a politician more than a pandemic expert. Fair’nough #latelate

A significant amount of people felt that Varadkar looked unprepared by consulting the notes during the interview and argued that he should have known the specifics of the roadmap before such an important moment on national television.

This interview does not look good. Doesn’t have specifics. Doesn’t know the document. Doesn’t know what testing capacity is available. Really poor #leovaradkar

One Twitter user questioned whether Sinn Féin's Mary Lou McDonald would get the same amount of praise if she had consulted notes during her interview.

The Taoiseach provided a number of updates during Friday's show.

Varadkar said in Friday's interview that the Irish Government is advising people to wear face masks in public when social distancing is not possible. He said that police will not enforce this since leading health experts are still divided on how effective face masks are.

He also said that the Leaving Certificate was still scheduled to start on July 29 and that sixth year students will have two weeks of school prior to the beginning of the exams.

However, he said that the issue is not straightforward and added that alternative options like predictive marking are still being explored.

Varadkar additionally said that the All Ireland football and hurling championships could go ahead this year behind closed doors but said that this was a matter for the GAA to decide.

Read more: “On May 18, Ireland begins to reopen” - Taoiseach outlines next phases