Ireland's Prime Minister, Doctor Leo Varadkar was photographed working his one shift a week as a doctor in Dublin. 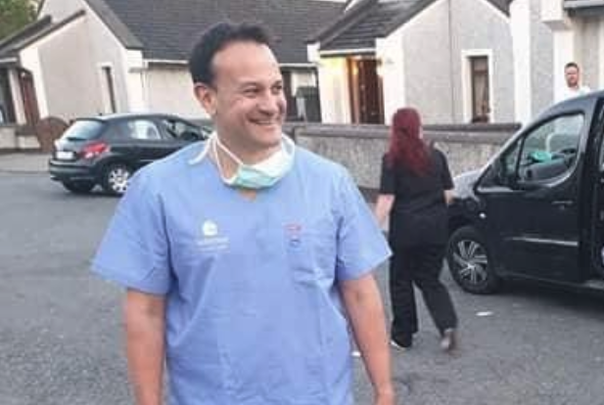 Ireland's Taoiseach (Prime Minister) Doctor Leo Varadkar was photographed working his one shift a week as a doctor in Dublin.

Taoiseach Leo Varadkar, who worked for seven years as a doctor for seven years before beginning his life in politics, has returned to the community to help fight the COVID-19 pandemic.

Varadkar was photographed by Fine Gael Galway City Councillor Eddie Hoare as he took a more hands-on role as leader in helping carry out community testings in Morgan's Place, in Blanchardstown.

On the front line - Taoiseach @LeoVaradkar at Morgans Place site in Blachardstown where he he help with #Covid19 testing of residents. This sends out a really positive message 👏🏻👏🏻👏🏻 pic.twitter.com/neqoZ817dZ

"On the front line - Taoiseach @LeoVaradkar at Morgan's Place site in Blachardstown where he help with #Covid19 testing of residents.

“This sends out a really positive message. [sic]”

Varadkar signed by on the medical register in March when the Irish government as the Be on Call for Ireland campaign was rolled out. So far 72,000 from around the world have signed up to aid Ireland's healthcare service to combat the outbreak.

Varadkar is the son of an Indian doctor and Irish nurse who met in London. His partner, Matthew Barrett, is a doctor at a Dublin hospital. Also, Varadkar's two sisters are nurses who are married to healthcare workers.

On Friday, Varadkar reported that he has worked three shifts carrying out phone assessment for the Health Service Executive since March. He has committed to one day a week.

When Dr. Varadkar signed by on to the medical registry a government spokesperson said "Many of [Varadkar's] family and friends are working in the health service. He wanted to help out even in a small way."