Laura Kavanagh, who had been serving as the FDNY's acting Fire Commissioner since February, has become the first woman to lead New York City's Fire Department in its 157-year history. 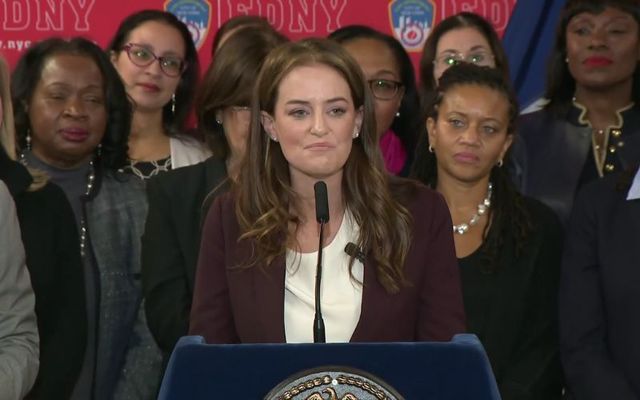 Kavanagh, who had been serving as acting FDNY Commissioner since February, has become the first woman to lead New York City's Fire Department in its 157-year history.

Kavanagh was sworn in on Thursday during an emotional ceremony at Engine 33, Ladder 9, in NoHo, where New York's first-ever Fire Commissioner John J. Scannell had his office.

FDNY shows us the very best of humanity in our darkest moments. That’s because the #FDNY is made of everyday people we all know - Fire Commissioner Kavanagh at today's swearing in ceremony. Read more: https://t.co/M5dNoWaOBw pic.twitter.com/N34QnsST56

In a statement, Mayor Adams said he was "proud" to appoint Kavanagh as New York's Fire Commissioner, describing her as a "proven and tested leader."

"No matter her role, Commissioner Kavanagh has always been a leader — from helping to lead the FDNY’s response to the Ebola outbreak in 2015 to steering the ship during the COVID-19 pandemic, to directing a firefighter recruitment program that resulted in the most diverse applicant pool in the department’s history," Adams said.

"New Yorkers and New York City’s ‘Bravest’ deserve an exceptional leader and Commissioner Kavanagh has the vision, the skills, and the compassion to lead the FDNY into the future."

Kavanagh said: “For nearly a decade, I have served, learned from and worked on behalf of the New York City Fire Department. I have seen the sacrifices our men and women make, the talent and training they possess, and the bravery they display saving lives and protecting our city.

“I am excited and grateful for the opportunity to lead this great department, and I thank the more than 17,000 Firefighters, EMTs, Paramedics, Fire Marshals, Fire Inspectors, and civilian personnel for all they do 24/7 to keep our city safe.”

Back in March, Kavanagh marched with the FDNY's Emerald Society up Fifth Ave for the 2022 New York City St. Patrick's Day Parade.