The lamb nicknamed 'Lucky Louis' had fallen 10 meters down the cliffside of Lambay Island off the coast of Dublin. 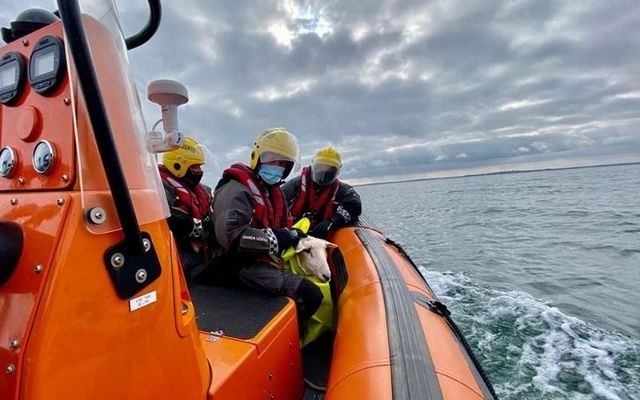 "Lucky Louis" made it safely back to shore on Lambay Island. Howth Coast Guard, Facebook

The Irish Coast Guard has rescued a lamb that fell down the side of a cliff on Lambay Island, located off the County Dublin coast.

The seven-month-old lamb nicknamed 'Lucky Louis' was stuck after falling 10 meters down the cliffside.

A 999 call was sent out and the Irish Coast Gaurd from Howth were dispatched to the lamb's aid.

Louis wasn't too keen on the rescue operation to begin and hid in a nearby cave.

However, two of the Coast Guard crew managed to secure the seven-month-old lamb and bring him back to their boat.

Louis was then brought back to the Lambay Island harbor and handed over to staff on the island.

Despite some small cuts he was otherwise in good spirits when returned to solid ground, the Coast Guard have said.

From there Louis was transported back to the Lambay Island harbor on the Coast Guard boat 'Seán Dunne' and handed over to staff on the island.

The Irish Coast Guard 999 operations centre got an unusual call today for the Dublin coastline. A sheep was stuck after...

For over a century the island has been privately owned by the Baring family. It is owned and protected today by the Revelstoke Trust and daily management lies in the hands of Alex Baring (7th Baron Revelstoke).

The island is a square mile in extent (630 acres), making it the largest island off the east coast of Ireland and the largest privately owned island in North-West Europe.

Lambay is host to a wide variety of wildlife, including fallow deer, rabbits, and notably, a large breeding colony of North Atlantic Grey (and Harbour) seals.

There is a large population of wallabies on Lambay, who were originally brought on to the island in the 1980s.

Lambay also has its very own natural water source, the Trinity Well, which provides fresh volcanic spring water and is used to create Lambay Whiskey.