A government junior minister has joined animal welfare experts in urging the public to observe the wild animal only from a distance. 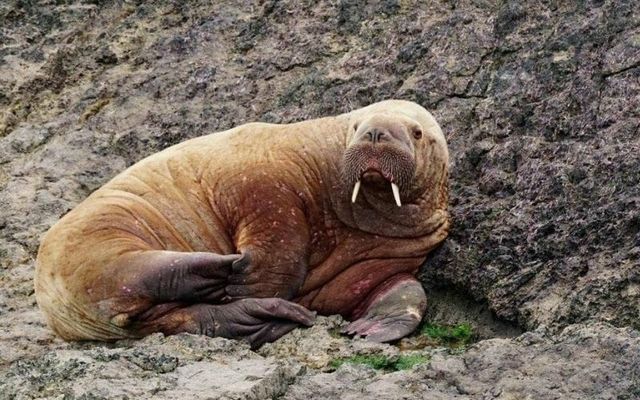 Public told to keep their distance from "Wally the Walrus," an Arctic walrus that has been spotted along the southern coast of Ireland.

The Minister of State for Heritage and Electoral Reform Malcolm Noonan TD has joined animal welfare experts in urging 'walrus-watchers'  to observe the wild animal from a distance.

Initially spotted along the coast of Western Europe, the Arctic walrus, who has been nicknamed "Wally," was first seen in Ireland off the coast of Valentia Island in March and has recently resurfaced in West Cork.

“While it’s understandable that many people are excited about the presence of a walrus on the Irish coast, we must remember that this is a wild animal and it should be respected," said Minister Noonan, in a statement.

"I’m appealing to everyone not to get close and only view it from a distance. This is for the animal’s sake, but also for your own, as there may be risks from a water safety perspective where large numbers of people are congregating on the water.

"Walruses are not a protected species under the Wildlife Act, it’s basically the same as a fox or rabbit under the law, so it’s up to people to cop on and have consideration for this poor wild animal, which is a long way from home. Leave it alone and if you must go and see it, use binoculars.”

Walrus Watch Update! Great efforts have been made to provide Wally the Walrus a designated haul-out site to safely rest as well as prevent further property damage. This rib was kindly modified and donated for this purpose by Nick from Nick and Annies Country Cottage. pic.twitter.com/nUTB3PasYl

Seal Rescue Ireland has also urged the public to avoid approaching the 800kg young male walrus after he was spotted in Crookhaven Harbour near the tip of the Mizen Peninsula in west Cork last week, according to The Irish Times.

“Please avoid approaching him within 100m. This is a sensitive species that is easily disturbed and he must be able to rest for his long journey back to Arctic waters,” said Seal Rescue Ireland in a Facebook post.

Wally has been hauling out onto boats and ribs to rest, causing thousands of euros of damage to a number of small boats, so Seal Rescue Ireland made an appeal for an unused rib or large pontoon to be donated that could be used a designated resting spot for the walrus, BreakingNews.ie reports.

According to the organization, they have since secured a designated haul-out site for Wally.

Seal Rescue Ireland has also asked members of the public to resist the urge to share Wally’s exact location publicly until there is a system in place for him to be monitored throughout the day.