"We essentially have the Ku Klux Klan operating in the North," Joe Brolly, GAA pundit and barrister, said this week after the Twelfth of July events in Northern Ireland. 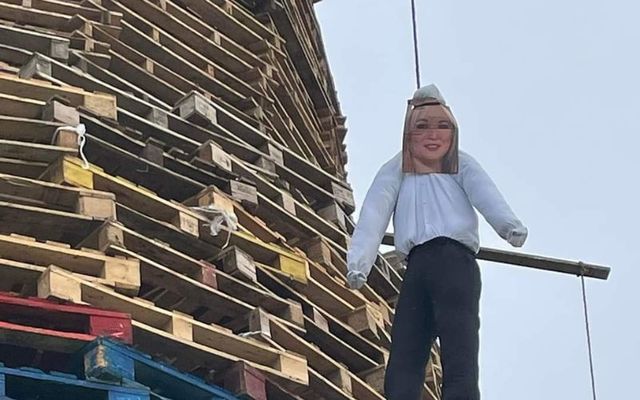 An effigy of Michelle O'Neill on an Orange Order bonfire. Joe Brolly Twitter

Joe Brolly, a GAA pundit and barrister, has compared the Orange Order to the Ku Klux Klan after a viral video showed several loyalists smashing in the window of a nationalist home during a Twelfth of July parade in Belfast.

Brolly pointed to the litany of sectarian abuse included on loyalist bonfires throughout Northern Ireland and likened the Orange Order to the KKK during an interview on Newstalk FM's The Hard Shoulder.

"It's very important to call it out. We essentially have the Ku Klux Klan operating in the North," Brolly told the Hard Shoulder on Newstalk.

Joe Brolly on @TheHardShoulder: 'We essentially have the KKK operating in the North'

"We have lodge members singing about a murdered Catholic girl and feeling confident enough to put that video out there like it's good fun."

He additionally hit out at the inclusion of nationalist politician posters and Irish tricolors on "Eleventh Night" bonfires throughout Northern Ireland. The inclusion of an effigy of Sinn Féin Vice President Michelle O'Neill at one bonfire in Co Antrim has drawn particular criticism.

Effigy of mother of two Michelle O’Neill hung on a bonfire. Lovely celebration of culture. pic.twitter.com/bZI62GYKay

"We have signs on all of the mega bonfires saying kill all Catholics, kill all taigs. We have face painters painting kill all taigs on kids' faces at the bonfires. Look, that's reality for us," Brolly said.

"We have bandsmen smashing up a house in the university area in front of the police, throwing a wheelie bin through the window."

Brolly was referring to a video of an incident in the Agincourt Avenue area of Holyland, Belfast from July 12 that has gone viral on Twitter, receiving more than 11.9 million views.

The video appears to show a man from a house with an Irish tricolor throwing a bin at Bangor Protestant Boys Flute Band as it marches past, prompting dozens of loyalists to converge on the house and smash a window of the house with a large wheelie bin.

One person was arrested but was released on bail, the Belfast Telegraph reports.

The Orange Lodge involved in this attack on a rental home have released a statement calling for “Nationalist politicians to show leadership” in bringing “an end to sectarian hatred, intolerance & violence.” Yes. Indeed… https://t.co/8z5lZYucC2

You can listen to Joe Brolly's interview on Newstalk here: